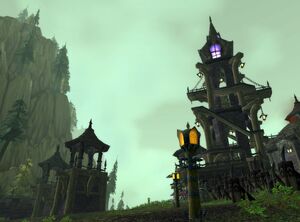 Vengeance Landing is the military outpost for the Hand of Vengeance in the Howling Fjord, northeast of Daggercap Bay and Utgarde Keep. Its main feature is its zeppelin tower which is the Horde's main point of arrival in eastern Northrend from Tirisfal Glades, just outside of Undercity. It also has a large dock area by the sea.

The Alliance ambushed Vengeance Landing, having established a small camp outside its walls. The Horde soldiers were not making any progress because of the cannons perched atop the fortifications. To help the infantry, an adventurer is sent by a bat to the navy, under attack offshore. They helped the sailors, suffering under the same ambush, by clearing their decks to make room for the support guns to fire. Back to dry land, the adventurer launched flares on the Alliance defenses, aiding the sighting of the naval guns.