Venim Iceblade was a random hero lich in Warcraft III. 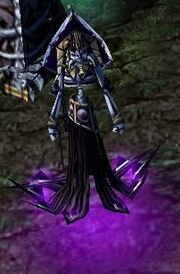 As seen in Warcraft III: Reign of Chaos.

He fought during The Scourge of Lordaeron against the Alliance.[1]

Venim Iceblade was the leader of a purple Undead Scourge base located near Hearthglen. One night he and Calis Wraithson decided to attack Hearthglen and all the nearby villages. They sent an Undead Caravan to the villages and undeads against Hearthglen.[1]

Meanwhile in Hearthglen Arthas arrived, killed the infected villagers and destroyed the caravan. He then prepared the defense of the city. Depending of the difficulty, Venim Iceblade attacks various times (hard) or just once (normal). At the end of the battle he is killed along with his forces by Arthas Menethil, Uther the Lightbringer, the city defenders and the Knights of the Silver Hand.[1]

He has been since replaced with random liches.