The Venture Company[2] or Venture Trading Company,[3] often shortened to simply Venture Co., is a goblin-run[4] cartel[5] notorious for plundering Azeroth's natural resources.[6] Considered part of the Trade Coalition,[4] the company operates throughout many parts of Azeroth, including Mulgore, the Barrens, the Stonetalon Mountains, and Azuremyst Isle in Kalimdor, Stranglethorn Vale in the Eastern Kingdoms, and Sholazar Basin and the Grizzly Hills in Northrend. During the Fourth War, the organization took control of the MOTHERLODE!! on Kezan. In addition to being known for their ruthless methods, the company has historically had dealings with various destructive organizations, including the Defias Brotherhood, the Iron Horde, and even the Burning Legion. 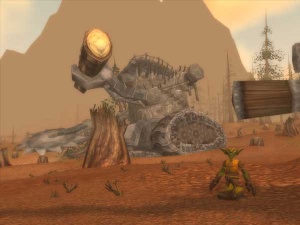 The Venture Company harvesting the forests of the Stonetalon Mountains. 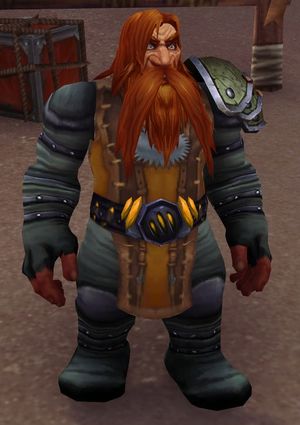 The Venture Company activities can be discovered in Mulgore, the Barrens, Stranglethorn Vale, and Stonetalon Mountains. They were known for stealing many of the best goblin minds.[7]

During that time the Venture Company was known to trade with various shady groups. It had dealings with the Zanzil of Stranglethorn Vale, which had discovered a way to raise the dead through the use of poison. The Company stored some of the mixture at Venture Co. Tower and traded the formula to the Defias Brotherhood, especially to Klaven Mortwake.[8]

Elements of the Venture Company have also entered into the service of Kael'thas Sunstrider, via his agent Engineer "Spark" Overgrind, the emissary of the gnomish High Tinker who accompanied Admiral Odesyus. Kael, via Overgrind, hired the Venture Company to recover the crashed Exodar, a portion of the Tempest Keep draenei were able to escape with when the aforementioned was hijacked by blood elves under Kael'Thas' command. It is unknown what happened to Geezle and the other members of the expedition.

The Venture Co. is present in the Grizzly Hills of Northrend, where they try to deforest the land.[9] They also appear at a small site in the Sholazar Basin, known as Swindlegrin's Dig, mining the crystals at the base of the Suntouched Pillar.

After the Cataclysm, Venture Co. has lost the control of the wells in Mulgore to the Grimtotem tribe but is still in control of the Venture Co. Mine. The company lost most of Windshear Crag in the Stonetalon Mountains to Alliance and Horde forces.

Numbers of goblins joined the Iron Horde as Iron Engineers on Draenor. It is not known how they got there but it is likely they entered Draenor during the brief time when the Ironmarch force took control of the Dark Portal and the Blasted Lands.

A joint operation between the Venture Co. and Iron Horde took place at the Darktide Roost,[10] probably implying that Blackfuse Company is its sub-group.

During the Legion Invasions, the oil platform at the Sludge Fen was defended by Oilrig Bombers, Oilrig Snipers and Oil Rig Engineers. It is unknown if they worked for the Venture Company normally occupying the area or the Horde-aligned Bilgewater Cartel.

An archaeology consultant from the Company is seen with Rohan Sunveil and Clarya Sunveil in a camp near the ruins of Kal'delar in Val'sharah.

A billboard in the MOTHERLODE!! advertising the company's Azerite mining operations.

The Venture Company can be found at the Windswept Coast in Stormsong Valley on Kul Tiras running an oil rig. Their actions have caused them to come into conflict with the Tortollan Seekers living at the nearby Seekers' Vista. Having enlisted the aid of adventurers, the Tortollan Seekers turned the Company's own weapons against them and beat them back. Despite their victory Toki remarked that the Venture Company was a resilient foe and was sure that they would meet again.[11] They can show up on island expeditions looking for Azerite.

The company made a deal with the Bilgewater Cartel and the Horde to refine Azerite for the Horde's war with the Alliance, but Venture's leader Mogul Razdunk backed out of the deal and Bilgewater's Trade Prince Jastor Gallywix sought revenge to get what they were owed.[12] The Company also attacked Blackrock Depths and stole

[Ironfoe], earning the Dark Iron dwarves' and Alliance's ire.[13] On Kezan, Razdunk started great dig sites in search of Azerite. Having never been able to ascend to Trade Prince, Razdunk was certain that becoming the world's foremost Azerite baron would bring him fame and fortune beyond his station.[14] However his actions in betraying the Horde and stealing from the Alliance caused adventurers to turn their ire upon him and they ventured to the MOTHERLODE!! to put an end to the leader of the Venture Company.[15]

The Venture Company later traveled to Tanaris to scavenge materials for their own use, however, the company came into conflict with the Horde and Alliance who sought to repair Feathers by using the machinery the Venture Company had acquired.[16]

Soon after Mechagon Island was discovered by the Horde and Alliance the Venture Company would arrive in order to exploit the land for every ounce of profit they could make.[17] In return, adventurers were tasked with driving them off the island.[18]

Please add any available information to this section.
These members of the Venture Co. are found in the northeast part of the Barrens, the Sludge Fen:

The Trade Coalition is huge, far-reaching and massively complicated. In addition, numerous other, smaller goblin companies, created and run by entrepreneurs called moguls (the hands of the trade princes)[19] operate throughout Azeroth. Perhaps the most famous of these smaller businesses is the Venture Company, founded and ruled by Mogul Razdunk.[20] The corporate group is a collection of greedy entrepreneurs who keep both eyes on the bottom line at all times.[21] Mogul Razdunk owns and runs the Venture Company.[19]

The headquarters of the Venture Company is located in Undermine. Ratchet also serves as a base of operations for many members of the company.[22] Though the city is governed from Undermine by the trade princes, Ratchet is (or was) run by members of the Venture Company.[21][23] The Venture Company is in competition with Gazlowe[citation needed]  of the Steamwheedle Cartel who is the ruler and Overseer of the city.[22] While the city operates under the watchful eyes of the trade princes, Gazlowe has considerable free rein.[22] The Venture Company employs a complex device known as a Truth detector in the City of Ratchet when they were making an important deal with a new supplier and wanted to ascertain whether or not the supplier is trustworthy.[24]

The goblins of the Venture Company threaten to reduce the entire Central Kalimdor section into an uninhabitable wasteland.[29]

Agents of the goblin-run Venture Company have also been sighted in the Stonetalon Peak area, searching for potential tracts to deforest and streams of precious ore to plunder with their mining machines.[33] They have a significant presence in the Stonetalon Mountains, chopping down trees and burning huge stretches of forest in the Windshear Crag basin. The goblins of Stonetalon are among the finest engineers of their race, and their inventions have allowed them to remove massive chunks of the forest in a few short months. The Venture Company is gradually destroying the remaining trees and taking the remaining resources from the earth[34] There has been a near-complete annihilation of sections of the Stonetalon Mountains (the Charred Vale in particular) with lumber-cutting machine by the Venture Company.[35] The Venture Company’s expeditions and mining operations changed much of the landscape to dusty, barren canyons and desolate cliffs.[28] If this process continues, Stonetalon could soon become as much a wasteland as Desolace in the south or the Barrens in the east. This endeavor draws ire from the night elves and tauren alike, who find the deforestation barbaric and dangerous. Many of the tauren still hold the unrealistic hope that the Venture Company can be reasoned with, and this belief prevents progress. While the majority of the night elves and tauren take defensive roles, the Grimtotem tribe strikes back against the goblins.[27]

The Venture Company has an operation in the Sludge Fen, in the Barrens' northern hills.[36] They also can be seen in Boulder Lode Mine, close to the shores of the Southfury River (and the oft-overlooked western entrance to Orgrimmar).

Since the Company had acquired a way to raise voodoo drones from the Zanzil trolls, it is possible the various undead members of the group in the Grizzly Hills are not former Forsaken but zombies as well.