A Verdant Sphere is a magical item used exclusively by blood mages such as Kael'thas Sunstrider.

Prince Kael'thas Sunstrider's verdant spheres were once three mooncrystals, which had been hidden at An'owyn, An'telas, and An'daroth in what is now known as the Ghostlands. The crystals connected at ley lines to help empower the great shield Ban'dinoriel around Silvermoon City, which made the capital impervious to attack. The crystals were seized by Arthas Menethil during the Scourge invasion of Quel'Thalas, who used them to dispel the barrier.

Kael'thas later recovered the crystals and, splitting the three between himself, Rommath, and Astalor, used them to overcharge and destroy the Sunwell, which had been irrecoverably tainted by Kel'Thuzad's resurrection. The crystals endured the Sunwell's destruction and had retained some of their power, but had also been corrupted by the explosion. Kael kept them in his possession from that day onwards.[1]

One of Kael'thas's Verdant Sphere.

The Verdant Sphere is also an epic quest-beginning item which drops from Kael'thas Sunstrider in the Eye. It begins

[70R] Kael'thas and the Verdant Sphere, which gives a choice of four rewards. The dropping of this item was also taken in account when Kael'thas later appeared in the Magister's Terrace where he only has two (shriveled) spheres left. It is worth noting that three of the rewards are named for the advisors you fight with Kael'thas. 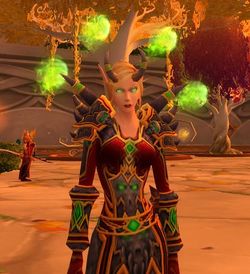 A blood elf warlock with

In Mists of Pandaria, Affliction and Destruction warlocks are able to use a minor glyph, 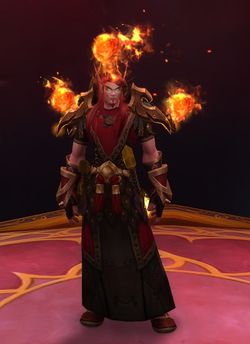 A blood elf Fire mage with three flame spheres around him.

[Felo'melorn] will have three flame spheres circle their character like verdant spheres around the Blood Mage hero from Warcraft III. They function similarly to Kael'thas' verdant spheres in Heroes of the Storm, they allow the fire mage to cast

The Verdant Spheres is Kael'thas' Trait in Heroes of the Storm that empowers his next Basic Ability. In two cases out of three, its color is changed to fel green. Normally, the Spheres float statically above the Sun King's head, but start orbiting when activated. They all are visibly spent and recharge one at a time.

This powerful arcane artifact appears to be a sphere of green magical fire that hovers around the owner in much the same way an ioun stone orbits its owner's head. Legend has it the orb siphons a portion of the essence of every evil outsider slain by its owner. The orb draws on the essence of these demons for its own powers, the spirits writhing in torment within it for all eternity. The reason it is most sought after by arcane casters, however, is its ability to enhance spells. All fire spells cast by the owner have their range widened, increasing the area of damage.[2]