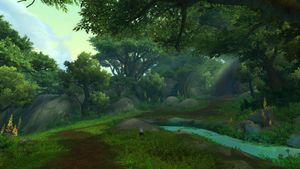 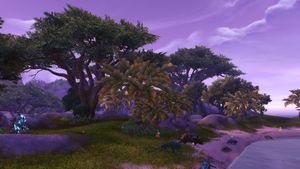 The Verdant Wilds is an Island Expedition in Battle for Azeroth. It is a forested island with a few ruins that teems with Spirit, the element of life.[1] It is inhabited by Cenarius's children, furbolgs and druidic peoples.[2]

The local keepers of the grove, dryads, and druids do not see others as allies. They seek to preserve the balance above all things, even if that means unaware adventurers' deaths.[1] The druids are those who, after the War of the Satyr, came to believe that at their core they were wild creatures, their humanoid forms were merely a guise. They left night elven society for this island.[3]