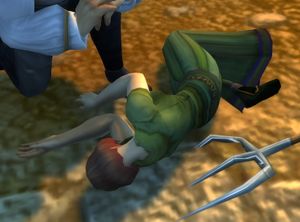 After her death during the Cataclysm.

Verna Furlbrow was the wife of Farmer Furlbrow, who owned a pumpkin farm in northern Westfall. The couple decided to leave Westfall when their farm was overrun by the Defias Brotherhood, but their wagon broke down on the road to Elwynn. Stranded, they wound up squatting at the Jansen Stead for the next five years.

Around the time of the Cataclysm, the Furlbrows and their horse, Old Blanchy, were found murdered near their cart at the Jansen Stead. Lieutenant Horatio Laine and some Stormwind Investigators were on the scene trying to discover what happened. The Furlbrows were killed on orders of Vanessa VanCleef because they recognized her.

Sometimes I think there's a big gray cloud in the sky, just raining down bad luck upon us. First, we're driven off our land, and now we can't even get out of Westfall. Everything's a mess. Something needs to be done.