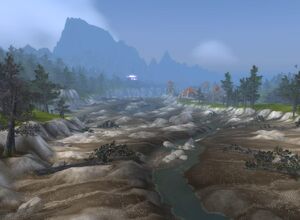 The Verrall River is the major river of the Twilight Highlands. It starts at Loch Verrall to the west and runs all the way to the Verrall Delta to the east, emptying into the Forbidding Sea. It effectively cuts the Highlands into two.

The river is relatively shallow, and at places can be forded easily. The riverbed is much wider than the stream of water in it. In some areas, the riverbed is a battleground between the Wildhammer clan of dwarves and the Dragonmaw orcs. The river also contains several waterfalls.

The Verrall is home to schools of highland guppies. The water is, however, too shallow for any larger creatures to inhabit it.