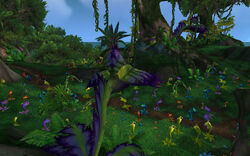 The Vicious Vale is valley just west of the Horde Base Camp on the Lost Isles filled with killer plants of multiple sizes and types.

Kilag Gorefang and a few Orc Scouts were sent west in search of "previous cargo". They got stuck fighting plants, which Kilag believes they've only angered them. Some orcs can be seen being strangled by vines.