"I serve Suramar. ALL of Suramar."

Victoire was originally a member of the Duskwatch, the force responsible for the maintenance of security and order in Suramar City during its 10,000-year isolation. With the arrival of the Burning Legion, Suramar's leader Grand Magistrix Elisande chose to ally herself with the demons to save her people, a decision strongly resented by much of the nightborne populace. Victoire and the Duskwatch, loyal to Elisande, quickly became preoccupied with putting down a rebel movement that sought the overthrow of Elisande and the Legion's expulsion.

As the Nightfallen rebellion continued to rage throughout Suramar, Elisande issued increasingly callous orders to the Duskwatch and her forces, largely aimed at terrorizing, starving, or otherwise forcing the citizenry to stay in line. Despite this, the Duskwatch remained steadfastly loyal to the Grand Magistrix, though many harbored reservations about the methods being employed. 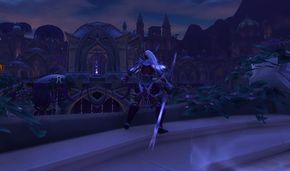 The Nightfallen rebels continued to gain significant ground, and in response Elisande would order a wholesale massacre of the residents of the Waning Crescent district, an area of known dissident activity. Victoire and numerous other previously-staunch supporters of the Gand Magistrix were horrified and disgusted by the slaughter, which served to finally drive many members of the Duskwatch to desertion. Victoire made contact with Nightfallen elements in the forms of Silgryn, Arluelle, and a champion of First Arcanist Thalyssra, and explained her desire to switch sides and join the resistance.[1]

With Victoire's help, the Nightfallen went on to identify many other members of the Duskwatch seeking to abandon Elisande's cause, and successfully urged them to desert their posts.[2] Later, Victoire would join Silgryn and Arluelle on a mission to free citizens captured by Elisande's demon allies and transported to Felsoul Advance for ritual sacrifice.[3] Together, the Nightfallen agents managed to temporarily disable the operation and slay the Legion commander Aargoss.[4] Victoire would also aid in the defeat of Thoramir and the raid to rescue Vanthir from captivity on the Terrace of Order.[5]

Eventually, the Nightfallen gained enough of an upper to hand to lay siege to Suramar City itself, alongside their new elven allies. In the main camp outside the city limits, Victoire was placed chiefly in charge of training the ragtag multitude of civilian rebels into a fighting force. Though she considered the job to be almost hopeless, she continued her efforts in preparation for an assault on the city, sending many of the fighters to Black Rook Hold in neighbouring Val'sharah to gain experience against the resident spirits.[6]

At the end of the civil war, Grand Magistrix Elisande was defeated in an assault on the Nighthold and the Burning Legion driven from Suramar. First Arcanist Thalyssra, as leader of the rebellion, would subsequently establish a new regime in the city, with the Duskwatch remaining as the main security force. Victoire was appointed First Blade and leader of the Duskwatch for her service during the Nightfallen rebellion.