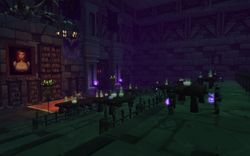 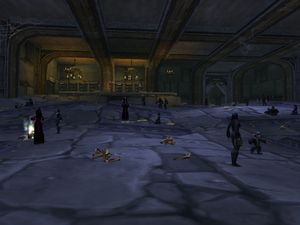 The Viewing Room is a chamber within Scholomance. It is accessed from the eastern branch of the large unnamed central chamber.

The door to the viewing room is locked and the key can only be obtained from Rattlegore, who can be found in the Great Ossuary, south of the central chamber.

Inside the Viewing Room are several students, as well as their tutors, Marduk Blackpool and Vectus. These NPCs will not attack players passing through the room unless one of the players uses

[Alexi's Gambit], which turns all the students into hostile non-elite skeletons.

The two exits from this room lead south to the Laboratory and east to the Headmaster's Study and ajoining chambers.

Marduk Blackpool and Vectus no longer teach in these halls. After their downfall, Professor Slate was more than happy to fill the post left by his former comrades. He plans to teach students to become deadly alchemists, but the pupils don't seem too trilled about it.