Vigilants are armored mechanical constructs[1] inhabited by the souls of the greatest warriors of the eredar. Originally created by the Wakeners on Argus, vigilants can also be found as protectors of the draenei civilization on Draenor.[1]

Vigilants were originally invented on Argus by High Wakener Aargon, under whom the Wakeners delved deeply into the mysteries of soulbinding. However, the vigilants only represented a mere fraction of what the Wakeners could do.[2] Nobles in Mac'Aree used household vigilants powered by crystals to protect their estates.[3] To this day, some vigilants can still be found in Mac'Aree, where knowledge to create more vigilants still rests within the Wakener's Enclave.[4] Some vigilants on Argus have not aged well, and where an ancient eredar soul was once stored in their cores, the constructs' long vigil have left behind nothing but a crystalline shell.[5][6]

The draenei continued the use of vigilants on Draenor. As they stand on the precipice of the afterlife, the greatest warriors of the draenei may be called upon for one final service:[1] through the holiest of rituals,[7] their souls are imbued into eternal vigilants that serve as defenders of their people[1][7] and protectors of the draenei's cities and temples,[8] particularly Auchindoun.[1] Miniature vigilants were created to protect domesticated elekks from pests, though they also turned out to be really good at giving back massages.[9] The high arakkoa of Skyreach closely observed the civilization of the draenei, taking a keen interest in the towering vigilants, and eventually set out to create their own superior version in the form of Araknath.[8] Following his defeat in Talador, Socrethar perverted the vigilant ritual and used a warped fel construct to preserve his own soul.[7] Years after the downfall of the Burning Legion on Draenor, Lightbound Vigilants accompanied the armies of the Lightbound as they invaded Gorgrond. 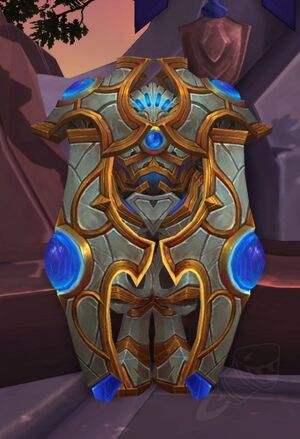 A vigilant in World of Warcraft. 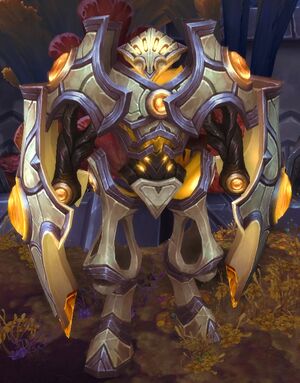 [Draenei Micro Defender] can be bought from Vindicator Nuurem in Stormshield at a cost of 1,000

upon reaching revered reputation with Council of Exarchs.

The Draenei Tomb Guardian, the only draenei arcane golem, may have been a vigilant. It too was related to the maintenance of Auchindoun.