“Every spare moment, every resource, has gone toward the birth of a new vessel. Our instrument of retribution.
The way is open. Come, children of Argus, allies, champions. The Vindicaar awaits!”

The Vindicaar (pronounced VIN-di-kar)[1][2] is a space-faring vessel, similar in design to the naaru dimensional ships, created by the draenei of the Exodar[3] in order to return to their homeworld of Argus. The vessel would go on to take part in the Argus Campaign against the Burning Legion, in which it acted as headquarters for the mortal forces.

The ship can maintain instant connections to various nearby and distant locations at a given time through the use of Lightforged beacons. The Vindicaar is also equipped with powerful defensive shields, as well as offensive air-to-surface weaponry.[4]

Currently, the Vindicaar has come under the control of the Army of the Light, who use the vessel as their primary base after the Xenedar's destruction, and who have since joined the Alliance. 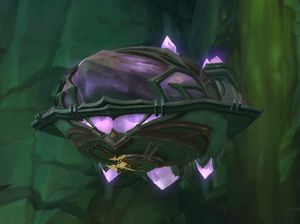 The exterior of the Vindicaar.

Preparations to make the Vindicaar operational first began immediately following the Battle for the Exodar,[5] during the third invasion of the Burning Legion, when the demons led by High General Rakeesh almost seized control of the draenei capital. These efforts were ordered directly by Prophet Velen, and overseen and handled by Grand Artificer Romuul.[6] The Exodar itself had long been crippled by the crash that brought the draenei to Azeroth many years ago, and so its restoration was not an option.

The Vindicaar's development would become a massive objective for the draenei. According to Velen himself: "Every spare moment, every resource, has gone toward the birth of a new vessel." As it finally neared completion, the need for such a ship became dramatically apparent, as a rift in the skies above Azeroth opened and connected it to the demon planet of Argus in the wake of Kil'jaeden's death. It was quickly decided that an all-out assault on Argus would be the key to finally bringing an end to the war against the Burning Legion, and that the Vindicaar would take the role of spearheading this attack. 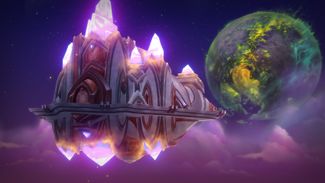 The Vindicaar departs for Argus.

In preparation for the journey to Argus, forces from across Azeroth, including the Alliance and Horde, converged on Azuremyst Isle to form an assault force. Light's Heart was also brought on board the Vindicaar at this time, and many key figures such as Illidan Stormrage, Archmage Khadgar, Vereesa Windrunner, Lady Liadrin and more arrived to take part in the coming campaign. The decided upon a plan of attack involved the Vindicaar rendezvousing with the Army of the Light on board the Xenedar upon reaching Argus itself, and from there launch a united offensive against Sargeras's forces.

When all was ready, the vessel departed from Azeroth and set a course directly for Argus, arriving above the region of Krokuun a short while later. Events quickly began to spiral out of control, however, as the Xenedar, upon also arriving at the meeting point, was devastated by a barrage from heavy Legion artillery, and crashed into the Argussian landscape. Desperate to prevent the same from happening to the Vindicaar, the forces on board launched an immediate assault on the demonic positions below, ultimately succeeding in neutralizing their long-range artillery in the area.

With the ship temporarily safe from destruction, the mortal champions began to secure the area, foremost by reestablishing contact with the Army of the Light. Throughout the remainder of the Argus Campaign, the Vindicaar would serve as a mobile base and launching point for operations across Argus, eventually traveling to the Antoran Wastes and Mac'Aree regions. Early in the battle, the former main weapon from the Xenedar known as Light's Judgment was successfully salvaged and installed on the Vindicaar, providing formidable firepower in the fight against the Legion.[7]

Battles and other operations would continue to be launched across Argus, and almost every base on the ground remained connected to the Vindicaar through various Lightforged beacons; using the Navigation Console in the Vindicaar itself could allow instant travel to any such beacons anywhere on Argus. The vessel also rapidly became the home of the Army of the Light survivors, as well as elements of the Argussian Reach faction of broken.

As the command ship for the invading mortal forces, the Vindicaar would come under heavy fire from Legion artillery in most locations on Argus (particularly the Antoran Wastes) though its shields were able to prevent serious damage. In charge of maintaining these defenses, Grand Artificer Romuul also ordered the recovery of a specific variety of crystal from the ancient constructs scattered around Mac'Aree, which were vital to these efforts.[8] 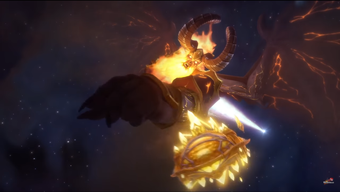 The Vindicaar escapes as Sargeras is imprisoned.

Velen and his allies would ultimately work to reassemble the ancient eredar artifact known as the Crown of the Triumvirate, believing its power to be vital in the Legion's defeat. Once all pieces were recovered and the relic restored in the Vindicaar's bridge, the ship itself underwent a dramatic transformation, the old purple color of its hull replaced with a holy gold.[9] At this stage, all was now prepared for the final assault on the Burning Legion's main base of Antorus, the Burning Throne, and the last struggle to end Sargeras's Crusade.

Turalyon and Alleria would lead the main assault of the Army of the Light on the ground, while the Vindicaar itself provided fire support and transport from the skies above Antorus. Light's Judgement was notably used to force entry into some of the fortress's deeper reaches. Ultimately, the mortal heroes would fight their way to the Seat of the Pantheon located in the Great Dark Beyond, where they battled and defeated the world-soul of Argus the Unmaker. All surviving victors (with the exception of Illidan Stormrage) then quickly boarded the ''Vindicaar'' once again to escape the area, as the Titan Pantheon united to permanently imprison Sargeras.

From the vessel the mortals watched as the dark titan, before being dragged to his prison, buried his sword into Azeroth's surface, with the Vindicaar only narrowly avoiding his desperate grasp on its flight. Afterwards, with the threat of the Burning Legion finally defeated, the mortals gathered on board to make closing remarks on the conflict.

“The Vindicaar may have been untested when we set out on this campaign, but she saw us safely home.”

In the wake of the successful campaign on Argus, the Vindicaar remained a base of operations for the Army of the Light.[10] Though their quest to defeat the Legion was now over, the Lightforged draenei of the ship continued to train new recruits and induct them into the army. Shortly before the commencement of the Blood War between the Alliance and Horde, High Exarch Turalyon met with King Anduin Wrynn and the other Alliance leaders in the Stormwind City Embassy.

Eager to once more aid his people, Turalyon pledged the loyalty of the Army of the Light, and by extension the Vindicaar, to the Alliance cause. The Lightforged draenei too desired to join their cousins from Azeroth and entered the Alliance as one of its newest allies. Grand Artificer Romuul appeared to have remained on the vessel following the events on Argus, continuing to oversee its maintenance and upkeep.[11]

Order of the Broken Temple

Knights of the Silver Hand

Council of the Black Harvest

Many character dialogues or gossip texts on the Vindicaar were originally in conflict with established lore, and erroneous. They were developer oversights, as some were confirmed to be and later fixed.