This article is about the lore of vindicators. For the paladin artifact trait, see 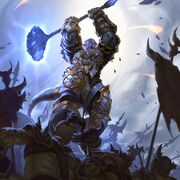 Vindicator is a title held notably by draenei and Zandalari trolls.

"Vindicator" is a title used by many draenei, similar to priests using the title of Anchorite. The exact definition of vindicator remains unclear. It is a generic title and profession.[1] While the majority of Vindicators are paladins, and it was initially assumed that it was an honorific for a paladin, the title also includes many warriors,[2] a few other classes,[3] and paladins and vindicators have been listed separately.[4] Anti-paladin and "dark vindicator" have been used as similar terms.[5] Paladin trainers in the Exodar are based in the Vindicators' Sanctum.

What is known is that the Vindicators are defenders of draenei society, standing as the primary guardians of Shattrath City during the orcish invasion[8] and are seen as both members and leaders of the Hand of Argus. All members of the Triumvirate of the Hand have this title. They are referred to as "holy warriors of the Light" and are counted as wielders of the Light along with Anchorites.[8]

Thal'kiel's whispers about Talixae Flamewreath mention that Vindicators existed on Argus as a police force.

There is also a Dark Vindicator Stavros serving the Burning Legion.

When law and justice are at odds, the Vindicators settle things.[9]

The "draenei vindicator" were heavy fighter units used by the Lost Ones in The Frozen Throne. With normal draenei later seen using this title, it is possible that these may be former vindicators that were corrupted.

In the RPG, Vindicator is a prestige class.

Although vindicators may come from any race or culture, all vindicators share one thing in common: They harbor an unwavering desire to bring retribution upon those they deem deserving of punishment. Vindicators only avenge those things they have personally witnessed or otherwise hold irrefutable proof of the wrongs they are trying to right. Vindicators are fueled by a deep hatred, which usually comes from the loss of a loved one, the witnessing of a horrible crime or injustice, or sometimes great personal suffering experienced at some point in the past. Vindicators travel the world to punish those who have harmed others. Vindicators are stern and humorless loners, they are not the easiest persons to befriend, but once they call someone a comrade they go to great lengths to protect, or avenge him. Vindicators are driven by the need to bring what they call justice upon their enemies. They sometimes appear to be merciless zealots who would risk their lives and those of their friends to seek retribution. They may be intense and focused, but despite their ill-reputed, and seldom understood ideas of what is right and wrong, vindicators view themselves as indispensable tools of justice. Vindicators seldom respect society's laws, but are willing to work with whoever they need to complete their self-appointed task. Vindicators often take on the roles of vigilantes, imposing their unusual sense of justice on the people of their communities. While vindicators may be rash, their actions are never evil, nor do they consider the act of seeking revenge especially cruel. After all, it is the right thing to do.

Vindicators originate from the human societies of olden days. Traditionally, vindicators remained close to their homelands to ensure that their special kind of justice was brought to their people's enemies. In ancient times, most vindicators focused their attention on creatures and groups that threatened the well-being of their people or the environment in which they lived. Today vindicators roam the world to punish those who harm it. Vindicators are sometimes fanatically righteous and perceived as perverted and cruel, they are misunderstood and mistrusted. Although vindicators would argue otherwise, those who meet a vindicator perceive the hatred that drives him as a force stronger than the individual who owns it. Thus, many people view vindicators as eerie, zealous individuals who cannot control their emotions. Though it is true that vindicators tolerate little frivolity, they draw strength from their inner rage and the power of their convictions. Those few individuals who call a vindicator friend understand this, and learn to respect those who are driven by this inner fire. Vindicators work best with people who share similar values. Most vindicators are relentless defenders of whatever noble cause they adopt, and they go to great lengths to bring their special brand of retribution upon those whom they consider enemies of that cause. Vindicators who reside in towns and cities are thorns in the sides of those who live off crime. They target thieves, assassins and slavers, as well as anyone who makes a living by taking advantage of others. Vindicators are a various lot, but regardless of their pasts, they are heroic characters considered a blessing to those who are on their side, and a deadly threat to individuals whom they deem deserving of their wrath.[12]