For the character from the main universe, see Farseer Nobundo.

Vindicator Nobundo is a draenei located at The Burning Front in Talador.

Nobundo aided the Auchenai and Sunsworn against the Burning Legion forces attacking Auchindoun. Nobundo later appears in Nagrand, called by the spirits of wind to aid the Furies. He commented that the elementals feel familiar.

Nobundo set out to rescue Gordawg and discovered that the dimensional ship Oshu'gun was emanating Void energy and corrupting the land, the elements, and the creatures of Nagrand. The Vindicator located the source of the problems - Cho'gall who was corrupting K'ure into a Void God. With the help of the adventurers, the ogre's plans were thwarted and the naaru alongside the enslaved Fury were defeated.

Nobundo then returned to his people to continue the fight against the Iron Horde.[1] 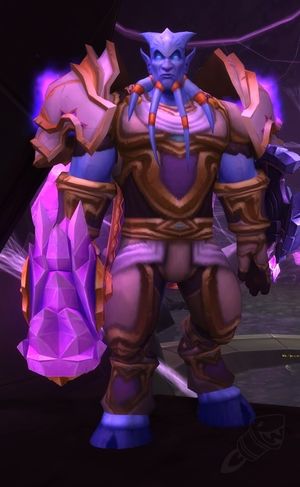