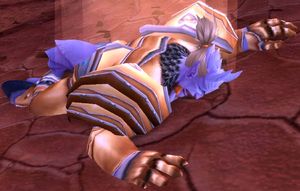 The corpse of Sedai.

Vindicator Sedai was a draenei vindicator who tried to form an alliance with a nearby Mag'har encampment only to end up mysteriously murdered.

He appears in a vision in which, after the mag'har roughly escort him from their village, he is assassinated by the fel orc Krun Spinebreaker.[2]

Makuru considered him a brother.

He was very likely a member of the Omenai.