For the instances, see Violet Hold (instance) and Assault on Violet Hold.

The Violet Hold (also known as the dungeons of Dalaran)[1][2] is the main prison complex of the Kirin Tor. Among the ornate spires and enchanted streets of Dalaran, the great Violet Hold stands as a testament to the glory of the city's rulers. Its cells are magically-shielded. Yet within its mighty walls, a dark truth awaits.[3] Much history is attached to this secure vault, with it being destroyed and rebuilt during the Third War. Storing a number of powerful prisoners, it has become a target for invaders as prison breaking the inmates has made it a popular invasion point for the envisioned fall of Dalaran.

Filled with row upon row of deadly inmates, Violet Hold has long been used to restrain threats to Dalaran.[3]

During the Third War.

In Warcraft III: Reforged, a Council Wizard was present in the Hold and was summoning various prisoners, sending them at the Scourge led by the death knight Arthas Menethil and Kel'Thuzad.

When the undead razed Dalaran in search for the Book of Medivh, Arthas and Kel'Thuzad discovered some creatures which the Kirin Tor had, according to Kel'Thuzad, "caged for studying". Although no sources confirm it, this might have been an early version of the Violet Hold.

During the aftermath of the Third War, Lord Garithos caught the blood elves - led by Prince Kael'thas - consorting with Lady Vashj, and forging a desperate alliance with her naga. Garithos branded him a traitor and threw him in a magical cell in the dungeons underneath the city of Dalaran. Kael found himself confined in the prison until Vashj broke him out, during their escape they put to rest the souls of four archmagi: Antonidas, Conjurus Rex, Fordred Aran, and Landazar. Similar to Arthas and Kel'Thuzad, they also found a furbolg and an ogre, which were experiments of the wizards of Dalaran and let them loose upon Garithos' guards. They also fought against some trapped undead and rescued the rest of the imprisoned blood elves. Finally, Kael'thas and the rescued blood elves killed Jailor Kassan, an old friend of Kael'thas, who guarded the exit to escape.[4]

After Kael'thas' escape the prison was diligently watched over by the Kirin Tor and it had enjoyed stability for many years… until now.[3]

Sometime after Dalaran was moved to Northrend but before the Alliance and Horde forces had arrived to reinforce the city. During a blue dragon attack on the city led by Malygos, Rhonin sent a young mage named Aodhan to the Violet Hold to meet with another mage. However the mage wasn't at the Violet hold, but Aodhan heard a voice telling him to come to the Violet Hold. It turned out the voice was his uncle Crevan, who had been stripped of his powers and put into a cell by the Kirin Tor. Later, after recovering the Spellbook of Argaleus which had restored Crevan's power, the spellbook let him free many of the prisoners from the cells.

Crevan, a mage hunter in the service of Malygos, hoped that releasing the prisoners in the Violet Hold would distract the other mages long enough for Crevan to cause the Dalaran to crash. Crevan briefly trapped Aodhan in one of the Violet Hold cells promising to come back later. Aodhan managed to free himself from the cell, and to stop some of the prisoners from escaping.[5]

In a sudden, violent assault, Malygos has unleashed his blue dragonflight upon Dalaran, hungry to reclaim arcane dominance over Azeroth. Utilizing a massive crack in the Violet Hold's roof, agents of the Dragon Aspect have begun pouring through portals within the prison, testing its integrity and risking the safety of everyone outside its walls.[3]

Overwhelmed by the audacious attack, the Kirin Tor has called upon heroes of the Horde and Alliance for assistance, seeking to put a swift end to the invasion. As brave adventurers rush to aid Dalaran, rumors circulate about the escalating ferocity of the battle.[3]

Violet Hold defenders seeking a brief respite from the ongoing offensive warn that the dungeon's vile inmates have begun escaping from their cells due to Malygos' reckless actions. And that, the guards' caution, is only the beginning.[3]

So critical is his quest to destroy Dalaran, Malygos has sent Cyanigosa, one of his most powerful lieutenants, to ensure victory and guarantee that the city is destroyed, along with any who dare defend it.[3]

As the onslaught continues to chip away at the Violet Hold's defenses, only the brave souls protecting the prison stand between the continued existence of Dalaran and the city's utter annihilation.[3]

The shivarra Alizabal was imprisoned here, not long after corrupt magi summoned her, but despite arcane wards restricting her powers, her influence alone caused her guards to murder one another in sudden fits of rage. Therefore she was transferred to Baradin Hold prior to the Cataclysm.

After Jaina Proudmoore expelled the Sunreavers from Dalaran, she imprisoned a number of blood elves in the hold (mostly those who were willing to surrender, the bewildered civilians on the surface, and the elves who did not escape the city with Grand Magister Rommath). Archmage Aethas Sunreaver informed the Thalassian leadership of their people's presence in the Violet Hold following his own return to Silvermoon City.

Should the adventurer be captured, they too would be teleported to the Violet Hold but would escape it and fight Archmage Lan'dalock guarding the entrance.

Jaina was holding the detained Sunreavers as prisoners of war. Lor'themar Theron, sovereign ruler of Quel'Thalas, has publicly demanded their release. 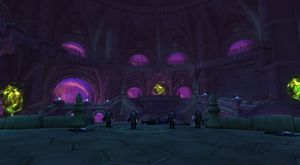 During the third invasion of the Burning Legion, a fel lord named Fel Lord Betrug and a aranasi named Sael'orn were instructed to lead a force of demons into the city from the Violet Hold. They hired Lord Malgath to free the inmates imprisoned during the war against the Lich King, some of the Lich King's most powerful servants,[6] and opened fel portals for the demons' arrival. The invasion ultimately came down to nothing, as a group of adventurers defeated and repelled their attack.

In addition, Meryl Felstorm confronted Kathra'natir here with the aid of the mage champion and spirit of Alodi to relocate the Forge of the Guardian to a safer place - the Hall of the Guardian.

Lieutenant Sinclari expressed her concern about the prison and wants to shut it down.[9]

Unique items fished up from the waters of Violet Hold (outside the instance):

Although not directly stated, the imprisoned Sunreavers may have been released when the Burning Legion invaded the city.