The virmen are a race of primitive rabbit-like people that live in Pandaria akin to kobolds.[1] Commonly seen as little more than aggressive pests, they are obsessed with vegetables, mostly carrots, though they have little love for turnips.[2] 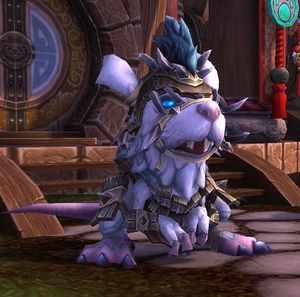 The virmen are an annoyance with the potential to become a serious problem. Rabbit-like pests with rat-like tails and powerful hind legs that send them bounding across terrain, virmen typically live and scavenge out of sight in caves and burrows. But when the civilized races of Pandaria draw near their warrens, the virmen are a famine on legs.[3]

Virmen are inveterate lurkers, awaiting the opportunity to grab carrion, garbage, or actual food whenever they can. They'll steal and eat nearly anything, then scurry away, leaving behind overturned tables and ransacked trash piles. The menace of the virmen is only slightly increased by their propensity to wield stolen daggers (or, failing that, sharpened pieces of bamboo) in both hands. Though most virmen avoid direct conflict, they are not unwilling to attack others in pursuit of the sustenance that drives their every waking moment.[3]

Virmen love vegetables, especially carrots. Virmen will often steal any vegetable they can find and sometimes use them in unorthodox ways, such as turning watermelons into toy boats.[4] Virmen have surprisingly sharp teeth for creatures that mostly eat carrots.[5] However, there is one vegetable they have no love for; the turnip. For some odd reason, virmen hate turnips to the point that they will sometimes deliberately go out of the way to beat them up. This odd distaste has caused many pandaren children to find ways to trick them into accidentally eating a turnip, such as painting them orange to look like carrots; a prank that the virmen often fall prey to.[6]

An odd trait is that they see pandaren as the real problem; they often will yell at attackers that they have 'ruined their land' and will tell them that the virmen land is off-limits (virmen land being any land the dig up and turn into a nest and surrounding areas).

Virmen (unsurprisingly) breed as fast as the rabbits they resemble.[7] They aren't very selective when it comes to breeding, but most broods will still have several alpha males and a single dominant mother figure. She's usually bigger, meaner, and tougher than anyone else in the brood.[8]

A group of virmen living in the Valley of the Four Winds led by Warren Mother tried to trade with and harassed Maraad and Lyalia but the arrival of local farmers forced them away. Later they encountered the dark shaman Zertin who killed the mother. Hooktooth then took the leadership of the group. The dark shaman attacked the farmstead of Haohan Mudclaw but the farmers tricked the virmen into attacking the orcs by stating that carrots would be killed.[9] 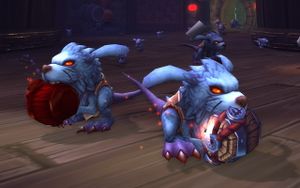