Not to be confused with Vision of Orgrimmar (quest).

The Vision of Orgrimmar is a constructed realm that is accessed through the Tenebrous Gateway found in the Chamber of Heart. The Orgrimmar shown in here, is not that of the waking world, but the dangers are as real as can be. Once unlocked, a series of altars can be activated to change the experience. The vision can be evacuated via the Expedition Gateway. One

[Vessel of Horrific Visions] is needed per expedition into the vision. Due to the twisted nature of this realm, the sanity of adventurers who brave its dangers is constantly drained. The Titanic Research Archive in the Chamber of Heart can be used to research ways to better withstand the madness of the Old Gods. The research is unlocked through

[Corrupted Mementos]. All enemies in the visions have a chance to drop these. They can also be found in Black Caches hidden through the visions.

A vision will end when the adventurers run out of sanity or a disciple of N'Zoth has been defeated. Once the disciple is defeated, the adventurers will be brought back to the hub area and presented with a Corrupted Chest.

While a single vision need not take long to clear, if only the main objectives are sought out, searching every nook and cranny may prove bountiful.

Thrall will gain one new ability, as well as a 10% health buff, from each of the bosses that have been killed. Killing the bosses will result in obtaining a chest for each one killed at the end of the vision. The vision automatically ends when Thrall is defeated.

Horrific Visions have a scaling progression system that can be activated called Faceless Masks. Each Faceless Mask that is used will increase the health and damage done of all creatures in the Horrific Vision. All 5 Faceless Masks share this same effect. If multiple masks are active, their effects are added.

In addition to the above, each mask has a unique effect. 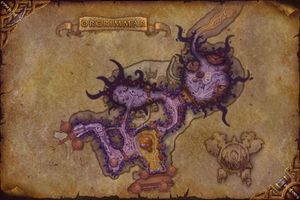 Map of the Vision of Orgrimmar.