The Vision of Stormwind is a constructed realm that is accessed through the Tenebrous Gateway found in the Chamber of Heart. The Stormwind City shown in here, is not that of the waking world, but the dangers are as real as can be. Once unlocked, a series of altars can be activated to change the experience. The vision can be evacuated via the Expedition Gateway. One

[Vessel of Horrific Visions] is needed per expedition into the vision. Due to the twisted nature of this realm, the sanity of adventurers who brave its dangers is constantly drained. The Titanic Research Archive in the Chamber of Heart can be used to research ways to better withstand the madness of the Old Gods. The research is unlocked through

[Corrupted Mementos]. All enemies in the visions have a chance to drop these. They can also be found in Black Caches hidden through the visions. Most writings found within the vision has been changed to Shath'Yar.

A vision will end, when the adventurers run out of sanity or a disciple of N'Zoth has been defeated. Once the disciple is defeated, the adventurers will be brought back to the hub area and presented with a Corrupted Chest.

While a single vision need not take long to clear, if only the main objectives are sought out, searching every nook and cranny may prove bountiful. Adventurers will occasionally find corpses looking like their own. 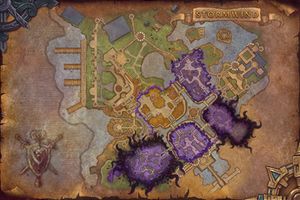 Map of the Vision of Stormwind.

The vision starts out in a copy of the Chmaber of Heart. Speak with the Image of Wrathion when ready.

- Defeat Alleria to end the vision


Alleria Windrunner has captured her son Arator the Redeemer and plans to turn him to the powers of the Void. Turalyon will try to stop her, but with little luck.

Once the cathedral is approached she will retreat to within the building. Two Fallen Riftwalkers stand guard outside and must be dealt with before entrance is possible.

- Aid Kelsey and play with explosives

The citizens captured in the initial assault find themselves locked up in cages at the Trade District with Inquisitor Darkspeak as the interrogator and Slavemaster Ul'rok as the jailer. As the last bastion of light, Halford Wyrmbane, is being tortured by Inquisitor Darkspeak. While brave adventurers may free him, his wounds will ultimately prove too great. As his dying wish, he asks the adventurers to slay Slavemaster Ul'rok and use his keys to free the citizens.

- Assist Valeera with some SI:7 downsizing
Overlord Mathias Shaw had gone on a purge on all those who oppose them. He hires the SI:7 agents to hunt the Light followers by espionage. Valeera was one of those captured and managed to escape their grasp. Angered by this news, he placed his assassins on full alert and sent them on a which hunt. As the adventurer enters Old Town, he is ambushed by SI:7 Light-Hunters. Valeera jumped in the fray and after ending the assassins, she teamed up with the adventurer and they moved deep within the district. They killed Armsmaster Terenson and Alx'kov the Infested to gain their keys. The two then proceeded to open the main gates and confront Shaw, where he was slain.

Fight with Alx'kov the Infested

In the Mage Quarter, Magister Umbric has given in to the madness of the Void and has turned the zone into a Void summoning location. Portal masters made up of humans, void elves, and faceless ones are opening portals all around, leaving most of the quarter contaminated by the void. After five of portal masters are downed, the way to Magister Umbric is opened. A final confrontation at the top of the Wizard's Sanctum is were Magister Umbric must be brought to justice.

Fight with Zardeth of the Black Claw

Once the vision is about to end, MOTHER will warp the adventurer to safety.

MOTHER says: Vision exploration concluded. Initiating exit protocol.
Image of Wrathion says: A blow well struck, but this was only the beginning of N'Zoth's vision. Additional horrors lurk throughout the city. Find them, and vanquish them.