Void Reaver is the second boss of Tempest Keep. It is a fel reaver built by the Burning Legion and taken by Kael'thas Sunstrider as a guardian for his palace, residing in the Eye.

The melee group fights in the center of the room.

Ranged and healers stay in a wide circle around the boss, at the maximum range of their abilities, in order to maximize available space and travel time for the Arcane Orbs. Well-geared Resto Shaman can consider staying with the melee group - this means that they take Pounding damage too, but never have to interrupt their

[Chain Heal] spam to evade Arcane Orbs. This tactic also works with a decently geared priest in the melee, as Prayer of Healing easily heals through the damage while conserving mana.

The encounter does not have different stages and is exactly the same from 100% to 0%. All raid members should be kept as close to full HP as possible, to increase their chance to survive an Arcane Orb or Pounding.

Due to the aggro reduction caused by Knockback, the main tank eventually loses aggro, and a tank rotation should be set up to counter this. Three tanks are necessary, and four are sometimes used. Void Reaver is not tauntable.

If three, or even two tanks are unable to stay at the top of the threat list, or if you need more dps, one tank with a high level of avoidance (dodge and/or parry), in combination with hunter misdrects can essentially solo tank this fight. The aggro drop from knockback is roughly 10k to 12k threat, with a few misdirects and a extremely well geared tank, it can be done. Items like Moroes' Lucky Pocketwatch can aid in this.

The Arcane Orbs should be avoided by running away. Ranged players should never run towards the melee, as this may cause an Orb to hit the melee. The room is large, and the orbs move relatively slow. Healers can stand with their backs to the Reaver, so that they can start running as soon as they see an incoming orb. Ranged dps should be spread out as much as possible for the entire fight, and at or near their maximum attack range.

Ranged dps should use their Maximum Camera Distance setting and look more up into the sky than usual. Early accurate recognition of the threatening Orbs is important for this fight. Ranged dps may want to use, "strafe moving" to make it easier to watch for new Orbs while running from an existing Orb. Some ranged DPSers may want to equip their

[Violet Badge] which gives a 13.5% chance to fully resist the Orb's binary spell damage. All players should have the buff, Mark of the Wild. Mage's Ice Block appears to effectively cancel an Orb's damage.

Note (1-28-2008): Currently the graphics do not match the explosion. The explosion will go off before the graphic "hits". It is best to begin moving within the first second, so as to be well out of range.

Starting with Patch 2.4.0 the Void Reaver stopped targeting a player before casting an Arcane Orb, so Add Ons such as Deadly Boss Mods or BigWigs did not warn players of incoming Orbs.[1]

As of Patch 2.4.3 there's now a combat log entry for cast orbs, the warnings from BigWigs work, and as of July 2008, Deadly Boss Mods was giving targeted players a warning. 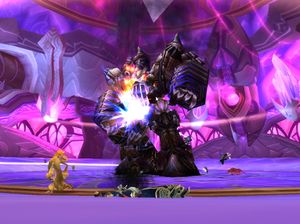 The easiest solution is to have the melee group eat the Pounding damage and heal through it. Circle of Healing is very effective, however if you do not have a priest with this then a shaman with chain heal can sometimes fulfil this role. In order to make

[Chain Heal] as effective as possible, the melee group should stay close together in this case. Rogues can use Cloak of Shadows right before VR starts Pounding to resist the arcane damage.

If the healers are not up to that challenge, it's possible to avoid the Pounding damage by running out of it. The Void Reavers hit box is nearly as large as the Pounding's AoE, stepping out of the damage doesn't cost that much DPS. The bigger problem is that they may be targeted by an Arcane Orb while outside the Pounding range. Therefore, the melee group should disperse when this tactic is used.

Since the fight is on a 10 minute timer, all DPS classes need to maximize their damage output while paying attention to their aggro. Threat-reducing abilities such as

[Invisibility] are invaluable. If Shamans are present in DPS groups, they should consider whether to drop a damage increasing Air Totem (like

[Wrath of Air Totem]), or a threat reducing

[Vampiric Embrace] to avoid healing based threat. This fight is like Broodlord - the more tanks the higher the threat that can be generated as every tank takes fewer knockbacks.

If the ranged DPS/Healers are having issues with avoiding the orbs, an alternate tactic is possible. It can done with 1 non-CoH Priest, 2 CoH Priests, 1 Resto Shaman, 2 Paladins and 1 Resto Druid, but it's easier with one more CoH-Priest or Resto Shaman. You also need at least 1, but preferably 2, classes that have an easy time moving at range.

The basic idea is that everyone, except the Hunters, run to the middle and park themselves under Void Reaver. The Hunters will stay at range and proceed to avoid Orbs like normal, though not really caring much about their DPS. When the Pounding hits the group, all AoE healers take care of the group while the Paladins heal the tanks, tossing other people heals should it be needed. This makes the fight even simpler, assuming people make sure they move if a Tank gets knocked back and VR follows and that tank and the Hunters/kiters don't get too close to melee, which will instantly lead to a wipe.

The advantages of this method are; DPSers don't have to move and can just continue nuking, and healers don't risk being out of range of the tanks. The cons are; Everyone takes more damage (though not terribly hard to heal through, especially not if everyone brings their

[Violet Badge]) and if an orb for any reason hits the raid, it's likely to cause a wipe.

This is a very different fight for casters and non-casters. Any specs not affected by silence effects may stand at Void Reaver's feet and melee it from 100% to 0%, ignoring the Arcane Orb mechanic for the entire encounter. Pounding and Knock Away are both inconsequential amounts of damage.

Casters will find this encounter's difficulty level entirely dependent upon how well they can do damage on the move. From the very beginning of the encounter, start circle-strafing around the Void Reaver and do not stop moving, applying any instant-cast (or cast-on-the-move) abilities judiciously. For specs where that is more difficult (such as frost mages), still keep moving, but stop as soon as an orb lands, wind up a quick cast, then start running. Repeat from full health to death.

Aggro
Alert! You are marked for Extermination!