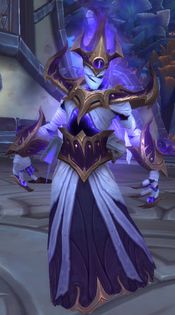 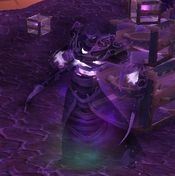 Void ethereals[1][2] are ethereals who were infused with and reshaped by[3] the power of the Void. Their energies are shadowy dark or red. They also hear maddening whispers that sway them to do the Void's will.[4]

Void ethereals are mainly found among the Ethereum, but individuals such as Locus-Walker, who is known for having trained Alleria Windrunner in the ways of the Void, exist as well. The goal of the Ethereum is to "become Void". On Outland, they managed to achieve their goal by manipulating the Void energy from the manaforges and bonding it to their own, creating ethereals known as nexus-stalkers.[5] During the third invasion of the Burning Legion, the Ethereum forces led by Nexus-Prince Bilaal also succeeded by consuming the Void energy coming from a rift to the Twisting Nether found in the Nexus.[6] The Shadowguard forces were led by Saprish, the "Ethereum-Lord of the Shadowguard", in an attempt to find a great source of Void, which turned out to be the dark naaru L'ura. Finally, the Netherguard, led by Nether-Prince Durzaan, attacked Magister Umbric and his followers on Telogrus Rift, in an attempt to transform them into ethereals. The process was interrupted by Alleria, which left them in a state in-between and prompted them to call themselves void elves.