Not to be confused with void lord or voidlord. 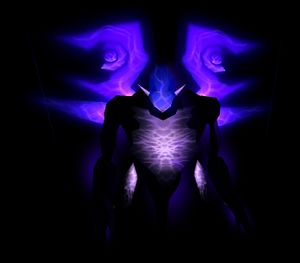 Void gods are a powerful type of void creature and the end result of a naaru losing its light. They are evil creatures of the Void and capable of destroying entire planets if left unchecked.[1] Several of the void gods that have so far been seen were created when the light of a naaru was forcibly drained from it, with the rest near K'ara, so they may not be a natural occurrence. A void god can be turned back into a naaru through great effort, as seen with Saraka and Saa'ra.

The rune Igannok is one of the many marks of the Void Gods, and using it is said to beckon their attention to you. While most practitioners would prefer to avoid the gaze of these beings, their attention can be beneficial when a great amount of void magic needs to be called upon. Therefore, it is wise to only use such marks when the benefits outweigh the potential pitfalls.[2]