For the specific mobs, see Void Hound and Void Terror. 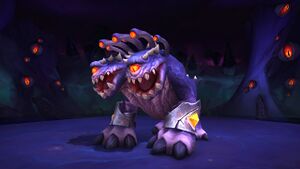 Void hounds,[1][2] also known as void terrors,[3] are huge and extremely powerful two-headed demons that roam the trackless wastes of the Twisting Nether like ravenous beasts.[2] They possess a nearly unlimited source of magical energy. Little information is available on these demons in Dalaran libraries; their appearances are infrequent, and their defeats even more so.[4]

While most of these creatures are classified as demons in-game,[2][3][5][6][7][8][4] some are instead classed as aberrations, and at least one void terror has been seen being summoned by wielders of Void magic.[9]

Prior to The Burning Crusade, the only known void terror residing in Azeroth was Immol'thar, found within Dire Maul in Kalimdor. Later, Kael'thas Sunstrider brought with the help of the Burning Legion a number of demons, including void terrors, to Azeroth to guard the Sunwell. A large number of them have also been sighted in Outland, guarding certain regions of the Blade's Edge Mountains and prowling the Netherstorm.