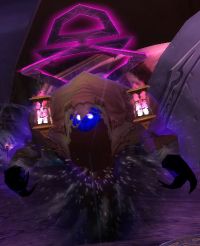 They can be difficult to defeat by some caster classes, as they will become resistant to the first type of magic used against them. An easy way around this is to first use a spell type that you don't normally use. For instance, a shadow priest will want to cast a holy spell first on the voidshrieker, so they won't reduce the damage of their shadow spells.

It should also be noted that voidshriekers also use the first type of magic used against their target as their base attack type. So a holy spell will cause the voidshrieker to cast holy spells on the player.