The unforgiving desert of Vol'dun is one of the three regions of Zandalar. Previously a vibrant and lush jungle, Vol'dun is now a virtually uninhabitable, vast sea of dunes dreaded by all Zandalari, for to be exiled to its endless wastes is a sure sentence of death. And yet somehow, the wily nomads known as the vulpera have managed to eke out an existence here, despite facing a constant threat from the sethrak, a brutal snakelike race determined to reign over this arid wasteland.[1]

Thousands of years ago, this vast desert with rolling sand dunes was once a dense, vibrant jungle,[2][3][4][5][6] described by Meerah as the jewel of the troll empire.[4] The Zandalari trolls and the snake-like sethrak lived in harmony in this region, and together they worshiped the snake loa Sethraliss.[7]

During the war between the trolls and the aqir[7] roughly 16,000 years ago,[8] the C'Thraxxi warbringer Mythrax the Unraveler was tasked with invading Vol'dun[7] and descended upon the region, slaughtering troll and sethrak alike. Sethraliss sacrificed herself to defeat Mythrax,[9][10] but not before the C'Thrax was able to destroy the disc at the heart of Atul'Aman.[9] Due to Sethraliss' death and the various cataclysms that occurred in the region as the years progressed, the jungles of Vol'dun were transformed into a vast desert.[3][7][10] As a result, most of the trolls abandoned the region. This left only the sethrak, who continued to survive and thrive in Vol'dun, which they considered the holiest of holy grounds.[7]

After witnessing the destruction wrought by Mythrax firsthand, the sethrak knew that something had to be done to prevent anyone from raising the C'Thrax again. Sulthis, Vorrik, and Korthek worked together to seal Mythrax within the great pyramid. Years later, Korthek grew power hungry and sought to free Mythrax to conquer Zuldazar. He gathered like-minded sethrak and declared himself emperor of the Faithless.[9][10]

In the present day, Zandalar sends its criminals here to die,[11] and most of them end up perishing. The area is mostly inhabited by Zandalari vagabonds, sethrak, and vulpera.[2] The Ashvane Trading Company has a presence in the southern edge of Vol'dun, mining for Azerite. 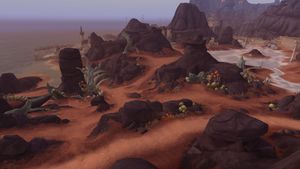 Located in the north west of Zandalar, Vol'dun is a vast and unforgiving land. Dunes of sand, salt flats, and bone breaking rocky terrain stretch from coast to coast, meeting up with Nazmir to the east and Zuldazar to the south. Danger here comes as much from the arid and unrelenting landscape as it does from the creatures who eke out a living here. The sand-bleached bones of giant beasts litter the land, long since picked clean and polished to a gleaming smooth by the shifting sands. Brief moments of reprieve from the heat can be found to the north in the small stretch of marsh and in the caverns and oasis tucked away from the unrelenting sun.[11] 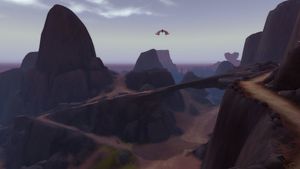 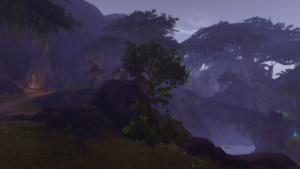 Sanctuary of the Devoted 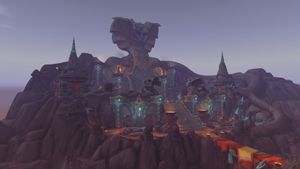 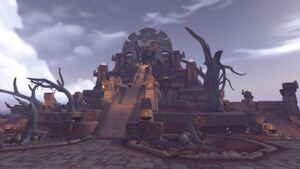 The Sanctuary of the Devoted. 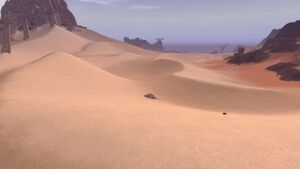 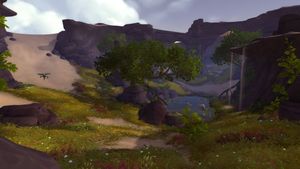