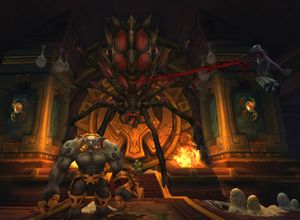 Vol'kaal was a dire troll member of the Zanchuli Council and also acted as the bodyguard and lieutenant to Yazma until he betrayed Rastakhan as part of the Atal'zul. He was then raised into undeath and relocated to Atal'Dazar.

Among the military of Zandalar are the elite dire trolls. These trolls are warriors who have perfected their arts, traded portions of their lives for the dark gift of brutal strength, and serve Zandalar as her greatest weapons of war. Long ago it was decided that the dire trolls should always have a seat on the Zanchuli Council, to ensure that those specials needs of the elite warriors were met by the government, and to provide the wisdom of war to those councilors who may seldom see a battlefront. Of these elite, Vol'kaal was chosen for his strength, his power and a strongly worded recommendation from Yazma. This would be the third dire troll appointed by Yazma, for they are short-lived, and their minds are easily bent.[1]

Vol'kaal accompanied Yazma when she traveled to the Port of Zandalar at Zul's command.[2] When Zul began his coup against King Rastakhan, Vol'kaal sided with the prophet. Seeking to siphon the power of the loa, Yazma and Vol'kaal pulled their forces to the Garden of the Loa.[3] Vol'kaal engaged the Speaker of the Horde in battle, as Yazma siphoned Shadra of her power. While Yazma would be successful in claiming the loa's power as her own, Vol'kaal would be killed.[4]

Yazma later used her newfound powers to reanimate his corpse with the intention of him serving her for all eternity.[5] Adventurers seeking to stop Yazma entered Atal'Dazar and clashed with Vol'kaal. As he died, Vol'kaal expressed his belief that his mistress would reanimate him once more.

Pissed
I promise not to smash you yet. I promise good. But maybe time for me to break promise!