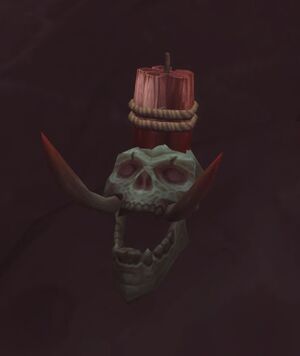 Volni is a member of the Goldtusk Gang at the Goldtusk Inn in Vol'dun. She is apparently quite bloodthirsty,[1] with a habit of challenging guests at the inn to duels and subsequently killing them.[2]

Like most of the other Goldtusks, Volni initially appears to just be an inanimate skull that Rhan'ka talks to when adventurers arrive at the inn.[2] Her skull looks as angry as an inanimate skull can be[3] and looks to be stuck in a perpetual state of screaming.[2] When Sandfury trolls attack the inn, Volni's skull is kidnapped and taken to the Sandfury Hideout. When adventurers sent by Rhan'ka arrive at the hideout, the cranium is sitting next to a pair of Sandfury Bandit corpses impaled by spears, having apparently killed them all by itself.[4] After adventurers are initiated into the Goldtusk Gang, they gain the ability to see the ghosts of the gang members.[5] Volni's ghost takes up residence next to a pterrordax post outside the inn's entrance and asks the adventurers to kill predators around the Whistlebloom Oasis to make it safer for guests and allow her pterrordaxes to fly freely through the skies.[1]

[110 - 120] The Best Kill is Overkill, Volni becomes a flight master for the Goldtusk Inn.