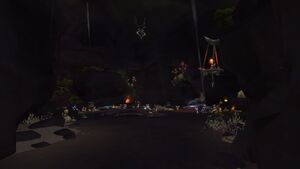 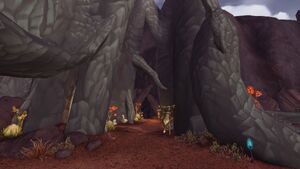 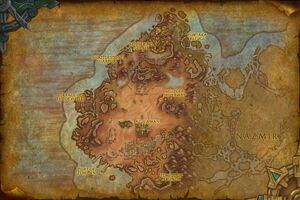 is a cave on the northern slopes of the Crackling Ridge, south of the Crater of Conquerors in Vol'dun. The entrance is located underneath a huge, hollowed-out dead tree. Years ago, the sethrak Vorrik used the cave as his personal sanctum and as a shrine to Sethraliss where he could meditate, until he was forced to abandon it due to Korthek's betrayal.[1][2] However, it is currently inhabited by vulpera who are fighting the Faithless sethrak and rescuing vulpera slaves.[1][3] Upon discovering this, Vorrik states that, while it's unconventional, he believes Sethraliss would be pleased to see her shrine used to protect innocents in need.[1] He also states that he can still feel the ancient power of Sethraliss in the sanctum, which he takes as a sign that his loa endures.[2]