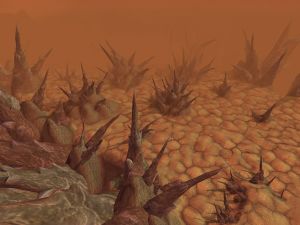 Vortex Summit is an expansive ridge located in western Blade's Edge Mountains. It lies west of Sylvanaar and Bladespire Hold, and leads north to Forge Camp: Wrath and south to Forge Camp: Terror. It is roamed by numerous creatures, including scorpids, colossi and warp stalkers. The enlightened ogres of Ogri'la, who have transcended the brutish nature typical to their kind with the help of the apexis crystals on the plateau, also make their home here.

Vortex Summit is normally only reachable with a flying mount but a player can be resurrected there by climbing around the mountains in north-western Zangarmarsh (until their map registers that they are in Blade's Edge Mountain) and then jumping off the edge of the world so that they die and are resurrected in the graveyard. (The player's ghost will not be able to get near enough their corpse to resurrect so will have to resurrect at the graveyard and experience resurrection sickness unfortunately.)