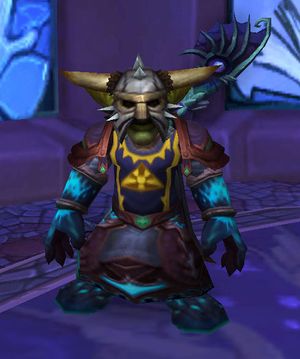 Vrykul drinking Horn is a rare archaeology artifact that requires 100 Vrykul Archaeology Fragments to solve. Up to three

[Vrykul Rune Stick] keystones may be used to complete it.

Using the Vrykul Drinking Horn does make you larger, and it replaces your helm with a spiky plate helm. While the horn buff does allow the

[Elixir of Giant Growth] to be used, the two do not stack to increase size together. In addition to the former, the player also make the vrykul attack sound then drinking from the horn. 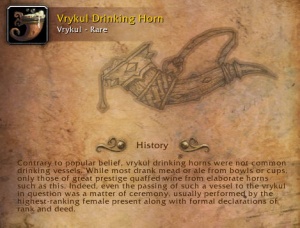 Contrary to popular belief, vrykul drinking horns were not common drinking vessels. While most drank mead or ale from bowls or cups, only those of great prestige quaffed wine from elaborate horns such as this. Indeed, even the passing of such a vessel to the vrykul in question was a matter of ceremony, usually performed by the highest-ranking female present along with formal declarations of rank and deed.