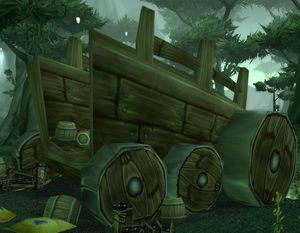 A wagon is a four or more-wheeled, big, open vehicle for transporting heavy loads. In general, beasts of burden such as horses, kodo beasts, nightsabers,[1] clefthooves[2] or ettins draw it. They can also be powered by magic. Wagons are heavy.[3] The vulpera live in wagons.

A wagon-cage is a cage designed to hold and transport a small number of prisoners over long distances.[4]

Wagons for human transportation are called carriages, stagecoaches, and palanquins.

War wagons are used by the Horde as a means of transportation and by the mantid as a type of siege weapons which they used in the areas of Townlong Steppes, including the Siege of Niuzao Temple.

Smaller wagons are also called carts which have four or two wheels and are drawn by a person or a beast of burden.

It comes with the harness needed to pull it. A wagon on runners is known as a sled. A bouncy ride in a wagon is a vigorous motion. A wagon train is a community with a large collection of wagons and corralled beasts of burden for hauling cargo, either locally or as part of a merchant caravan. Wheelrights can be seen making or fixing wagon wheels.[13] Wagons weigh at least four hundred pounds.[14]

A cart is two-wheeled vehicle drawn by a single horse (or other beast of burden). It comes with a harness.[15]