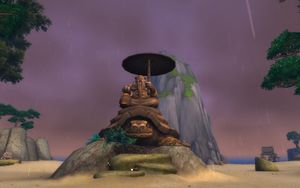 Waiting for the Turtle is a wood-panel scroll at the foot of the Statue of Liu Lang, a monument of Liu Lang and Shen-zin Su located at [72.2, 30.5]

On this site many generations ago, equipped with little more than an umbrella and pack full of food, the young pandaren explorer Liu Lang set forth to explore the world on the back of a sea turtle.

At the time it was widely believed that the rest of the world had been destroyed in the Sundering. Common wisdom had it that Liu Lang was... "damaged" in the head.

Everyone was proven wrong when Liu Lang returned five years later, spouting tales of mysterious lands beyond the sea. He would go on to return to Pandaria every five years for the rest of his days, his turtle growing bigger and bigger with each visit, until it was large enough to house an entire colony.

Pandaren afflicted with the wanderlust often stared out across the sea awaiting his return. To this day, when someone is caught gazing off to the horizon for any reason, they are often asked if they are "Waiting for the turtle."