The Wandering Ancient mount is the winning candidate of the Choose the Next Shadowlands Mount poll. It will be coming in Q1 2021 and be given free to all World of Warcraft: Shadowlands owners.[1]

Not all ancients are interested in war or lore, some just want to travel the world! This arboreal nomad has traveled to many places and with each passing season embraces change, both in scenery and in the foliage atop its branches. 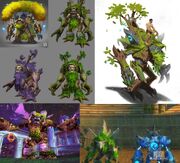 Concept art and reference images for the Wandering Ancient.

When it became clear that the Wandering Ancient had won the Choose the Next Shadowlands Mount poll, artist Jon McConnell was tasked with bringing the mount to life. The first step was to collect a reference board with concept art, images of past iterations of ancients, and fan art by the community. McConnell figured that if the team were to introduce a new type of rideable ancient, it should line up with the pantheon of past ancients, all of whom have looks that aesthetically fit their purpose. McConnell wanted the Wandering Ancient to feel like a natural growth or root system that a player might have come across and sat down on, only to then suddenly find themselves atop an uprooted creature.

Once the concept was finished and McConnell began modelling the mount, he ended up keeping a lot of the foliage from World of Warcraft's original ancient protector model. Some other major parts of the mount had to be created from scratch, namely the main torso and head. The mount's animation rig was built by Waleed Boghosian, after which it was passed over to the animators, who used the animations of the the original ancient models as a foundation to build upon. A lot of animation work is based on the movement of animals in the real world, but in the case of fictional creatures that only exist in WoW, the animators like to film themselves for reference, which helps them get a feel for the mindset and personality of the creature. In the case of the Wandering Ancient's animations, animator Corin McCrate acted as the stand-in.

The mount's vocalizations were provided by longtime Warcraft composer Glenn Stafford, who has previously contributed his voice to previous iterations of ancients. The Wandering Ancient's voice was intended to match the fact that it's a little smaller, friendlier, and more inquisitive than others of its kind.

The mount features an easter egg in the form of a small caterpillar sticking out of the tree on the ancient's back, as a nod to the Curious Caterpillar, one of the mount concepts that did not win the poll. This idea was suggested by Kelvin Tan and added by Jon McConnell.[2]