The Wandering Isle storyline is the pandaren level 1-10 starting experience. Freshly-created pandaren start out neutral, in their own instance. Once players reach the end of the chain, they will be forced to make a one-time-only decision as to which faction they wish to ally with, Alliance or Horde. Once the decision has been made, players will not be able to change that decision via in-game means (though out-of-game tools like Faction Change still function). 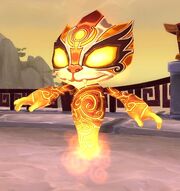 Pandaren start out life as adventurers at the Shang Xi Training Grounds on the Wandering Isle looking in the direction of Master Shang Xi. He quickly puts young pandaren through their paces in challenges of increasing difficulty. Confident that the adventuring pandaren can survive life outside the training grounds, the master sends them out to meet Aysa Cloudsinger and Ji Firepaw in an effort to recover the four elemental spirits. The first spirit found is Huo, the ancient spirit of fire, who is then quickly taken to the Temple of Five Dawns at the center of the Wandering Isle. 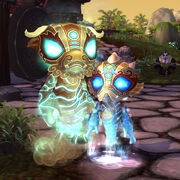 Wugou and Shu, the spirits of earth and water

Master Shang Xi next sends adventuring pandaren east to the Singing Pools, to find Shu, the ancient spirit of water. Shu is sad that Old Man Liang is no longer playing with him, so it is up to the adventurer to make friends with him. Once that has been accomplished, Aysa sends adventurers forward to Ji at the Dai-Lo Farmstead, which has been overrun by virmen. After Ji's ideas fail to wake Wugou, the ancient spirit of earth, Shu lends some assistance.

To the air and beyond 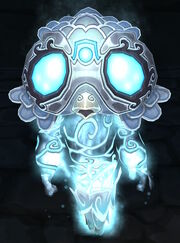 No time to rest at the temple as the master quickly launches adventurers upstairs where Ji leads them to the Morning Breeze Village to solve the hozen problem once and for all. Not that slaughtering hozen has anything to do with finding Dafeng, the ancient spirit of air. Aysa realizes that Dafeng has been driven into hiding by Onyx Serpent, who must be killed in order to ease Dafeng's fears. All four spirits recovered, Master Shang Xi has one final task for adventurers to accomplish by clearing the Wood of Staves of sprites. That accomplished, he has one last piece of wisdom to impart on the young pandaren. Use that knowledge when riding the hot air balloon to speak with Shen-zin Su and discover the source of his pain.

Realizing that the source of Shen-zin Su's pain is The Skyseeker, a crashed gunship, the adventurer and Master Shang Xi's disciples head into the forbidden Pei-Wu Forest. There, the party helps triage members of the Horde and Alliance, as well as fend off new horrors from the depths. This culminates in a boss fight with Vordraka, the Deep Sea Nightmare. Immediate threat taken care of, Ji decides to blow up what's left of the Skyseeker! Shockingly, this plan actually works, to a point. Shen-zin Su now has a river of blood pouring into the sea and it's up to healers of both the Alliance and Horde to stitch him up, but not without what's left of the invading forces harassing the healers. Defend the healers long enough for them to do their job, then move on to the next problem—the Alliance and Horde forces are at each other's throats!

At the end of the storyline, you must choose which faction you want to pursue.

Back at the Temple of Five Dawns for the last time, pandaren adventurers must now make the most important decision of their lives. The time has come to decide which faction to ally with. Upon completing A New Fate, adventurers will be whisked to their new capital city in order to meet their new leader.

Alliance members find themselves outside of Stormwind City in Elwynn Forest along with Aysa and Jojo to meet Varian Wrynn:

Horde members will find themselves at the Dranosh'ar Blockade just outside the gates of Orgrimmar alongside Ji to meet Garrosh Hellscream:

Adventurers then have the choice of any 10-20 leveling zone accessible to their new faction: