During the Second War, Voone led small strike teams on daring missions into the heart of high elven territory. The cunning troll joined the false Horde because he wanted to be its chief strategist, not because he believed in Blackhand's ideology. Voone sees the splinter faction as an underdog, and he enjoys the satisfaction of overcoming insurmountable odds. 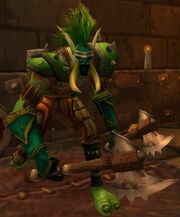 Note that directly behind him is the

[Sixth Mosh'aru Tablet] for the quest

[58] The Final Tablets. Watch the floor near him, as the

[Important Blackrock Documents], another quest item for the quest

[60D] Warlord's Command are there 1/4 of the time. If the documents are not there, they are guarded by Highlord Omokk or Overlord Wyrmthalak, or are by the ogres just after the spiders. He tortured Mor Grayhoof nearly to death.

Stage One: The Thrasher

When War Master Voone reaches 40% remaining health, he begins his final assault, holding nothing back.

Pretty straightforward fight, just Tank and Spank. He is immune to stuns and does have a stunning blow. Be aware that he does hit hard and throws the tank into the air a few times. He doesn't lose any aggro, but it can be tricky if DPS is piling in and the tank cannot maintain aggro during airtime. He also uses a warstomp, similar to Thunderclap, but reduces movement speed instead of attack speed.

Mind Controlling the berserker in the previous room to tank Voone will not work. He loses the MC the moment he attacks Voone.

A well geared 70 can solo him but he will put up a fight so you will have to use all your Cooldowns, and pack a Healing Potion and/or

[Healthstone], just remember that no stuns or disorient effects work so it will be a straight forward fight. 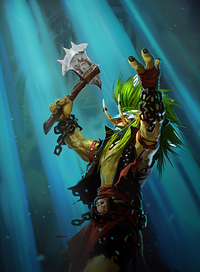 In the Hearthstone expansion Rastakhan's Rumble, Voone serves as the champion of Akali's Rhinos, a team of troll warriors, and appears as a legendary warrior card. His flavor text reads: "War Master sounds cooler than Dragon Sitter."