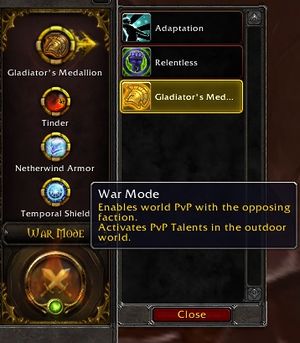 War Mode allows players on any realm to participate in open-world PvP with like-minded players in the ongoing battle between the Horde and the Alliance. Turning on War Mode applies the Enlisted buff and provides incentives to compensate for the perceived risk of being targettable by the opposing faction.

“With War Mode, we wanted to solve the problem of some players feeling “locked” into one play style or another by their realm choice. They might have picked a PvE realm purely because their friends were there, even though they were interested in open world PvP. Conversely, they could have chosen a PvP realm to start, but later decided it wasn’t for them anymore.''”

With people opting into the War Mode experience from any server, Blizzard can now tailor quests for those interested in it while avoiding the potential stigma and separation of friends being locked to different types of servers. All those who queue up for War Mode will be on one server shard, and those who do not will be on another. However, the sharding is ignored in the capital cities of Stormwind and Orgrimmar and players with War Mode can rejoin their non-enlisted peers by toggling the mode off in any rested place.

With War Mode enabled, a +10% bonus applies to experience from quests and mob kills, and to gold, currency or Azerite Power from world quests. If a faction is outnumbered, a War Mode: Call to Arms adds up to a further +20% bonus. Furthermore, if there participation is overwhelmingly one-sided then the opposing faction will be offered the

[120] Against Overwhelming Odds quest as even further incentive to participate. 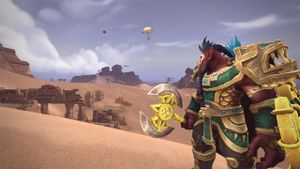 Infrequently, flying machines on Zandalar and zeppelins on Kul Tiras will make its way across the sky within a zone and will eventually drop a War Supply Crate where players can fight over and claim it for their faction, similar to the chest in the Gurubashi Arena. Once a faction has gained control of the crate, anyone of that faction who is within the area will have a short period to open it and collect a piece of personal loot.[1]

The time limit between each air drop is speculated to be around 20 minutes, but that hasn't always been the case. 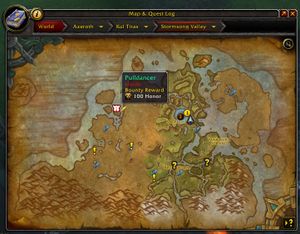 Bounty Hunter System with War Mode in Battle for Azeroth.

Killing a certain number of players of the opposite faction, without dying awards the status of Assassin that increases damage and healing by 15%. The downside to this, the more players an Assassin kills, the more likely they will show up on the zone map for other players to target and to gain a bounty. Players who successfully kill an Assassin of the opposite faction will receive Conquest points as well as other rewards. There can be three or possibly more Assassins on Zandalar or Kul Tiras at a time, providing plenty of opportunity for players or groups of players to take their revenge on the opposite faction's Assassins.[1] This system was available in Darkshore during the War of the Thorns limited-time event.[2]

The following buff is applied upon entering Zandalar or Kul Tiras with War Mode enabled:

Upon killing 10 players of the opposing faction, the Assassin buff will be applied.