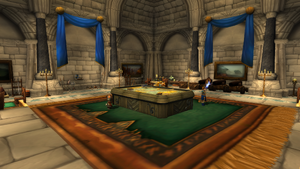 The war room at the end of Battle for Azeroth. 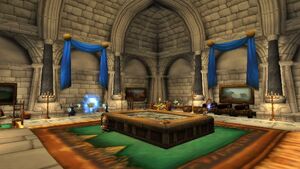 The war room in Legion.

The war room,[1][2] also known as the map room,[3][4] is located inside Stormwind Keep, to the right and southeast of the central throne room as you enter from the main hall of the keep. Weapons of war line the walls, everything from blunderbusses to swords to even three cannons. There are areas piled high with books about military strategy and its signature map table at the room's center where Alliance military leaders plan their strategies. It is the location of all the battlemasters, which moved into this room from the throne room in patch 2.0.1. It is also here where players can turn off their experience point gain by paying Behsten. 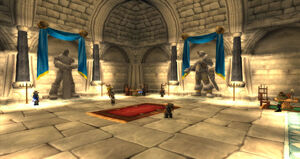