For the Doomguard ability, see 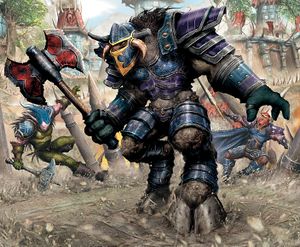 War Stomp in the World of Warcraft Trading Card Game

When the tauren put their foot down, people pay attention.[1]

War Stomp is a tauren racial ability that stuns up to 5 enemies within 8 yards of the player for two seconds. Its cast is not interrupted by pushback.

Although it has a 0.5 second cast and the stun duration is not that lengthy, it may still create time for spellcasting. Unfortunately, auto-attacks will not trigger while a target is stunned on account of this ability, though special abilities will. For example, a tauren warrior will land no auto-attacks on the stunned target until War Stomp's effect has faded, but abilities such as

[Slam] can still be used normally.