War of the Spider

"The nerubian race, yes. Then the master came. As his influence spread, we made war upon him, foolishly believing we stood a chance. Many of us were slain and raised into undeath.
In life I was a king. Today I am a crypt lord."
—Anub'arak, former leader of the nerubians, commenting on his kingdom's fall

The War of the Spider[2] was a conflict fought between the fledgling undead armies of the recently-created Lich King and the forces of the insectoid Nerubian Empire of Azjol-Nerub, on the continent of Northrend.

The war began when the nerubians, dwelling in their subterranean empire beneath Northrend, launched an attack on the newly-created Lich King, who could raise and command the undead and had formed his own army of the dead: the Scourge. The attack was in response to the Lich King's attempts to lay claim to the entirety of the continent. Resistant to many of the Scourge's powers, and utilizing effective guerrilla tactics, the nerubians were able to momentarily gain the upper hand. Soon, however, the Lich King launched a massive assault on the insectoids' underground capital, Azjol-Nerub.[3]

According to Kilix the Unraveler, it was during this invasion that the nerubians inadvertently unearthed the hostile faceless ones, minions of the old god Yogg-Saron, at the heart of their empire. Now caught between two powerful enemies, the Nerubian Empire was overwhelmed and destroyed.

Following the nerubians' defeat, the Lich King used his necromantic powers to incorporate the vast majority of their dead into his ranks, and subsequently adopted their architectural style as his own. Chief among those risen was the former nerubian leader Anub'arak. Now serving their conqueror, the raised insectoids became one of the Lich King's most potent and reliable weapons in the conflicts to come.

Rise of the Lich King 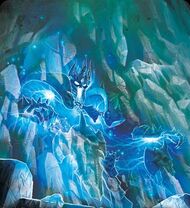 Following his death on the planet of Draenor, the orc shaman Ner'zhul was sent as a spirit encased in ice to the continent of Northrend by the demon lord Kil'jaeden. The orc's spirit was also granted immense psychic and necromantic powers and was charged with building an army which he would then use to invade the rest of Azeroth.

As his power and influence grew and spread across Northrend, Ner'zhul, now the Lich King, began slaughtering and raising many of the continent's living inhabitants and incorporating them into his new army, known as the Scourge. His armies continued to grow by the day and the Lich King eventually had a great citadel erected around him in Icecrown which was manned by the undead. After 10 long years of consolidation, the Lich King's actions finally drew the attention of perhaps the Scourge's only equal on the continent: the Nerubian Empire.[3]

In an effort to end the Lich King's bid for dominance of the continent the nerubians, an insectoid race descended from the aqir, dispatched a section of their most elite warriors to assault Ner'zhul's base in Icecrown. This force engaged the undead Scourge in the region, but the Lich King soon discovered, to his frustration, that the nerubians were virtually immune to both the Plague of Undeath and his potent telepathic powers, which had proved so effective against Northrend's other denizens.

The insectoids possessed a vast network of underground tunnels and caverns which stretched the breadth of much of the continent, and which the nerubian leaders now used to their advantage against the undead. Deploying their vast forces in hit-and-run tactics as opposed to pitched battles allowed the Lich King's assailants to neutralize many of his strongholds, without running the risk of being rooted out. Despite these successes, however, the practically limitless numbers of undead at Ner'zhul's disposal proved impossible for the nerubians to overcome, and soon the Lich King struck back against the subterranean kingdom.[3] 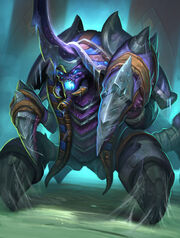 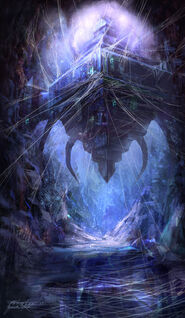 The underground kingdom of Azjol-Nerub

Eventually, the Scourge launched a large invasion of the nerubians' underground nation led by the Lich King's powerful dreadlords. The insectoids were forced back under the relentless assault, with many of their temples and structures being brought down on their heads. Although the nerubians had proven resilient to the Plague, the Lich King was still able to use his powers to raise them in undeath once they had been slain on the battlefield. During the fighting, the Nerubian Empire's king, Anub'arak himself, was killed and subsequently raised by the Lord of the Scourge. Along with several of his lieutenants, the former ruler of the spider kingdom now slaughtered many of his former brethren at Ner'zhul's command.

Impressed by the insectoids' tenacity and fearlessness, the Lich King even adopted many of their architectural designs for his own fortresses and structures.[3]

At some point during the battle, the nerubian viziers released a single spider that would one day grow to challenge the Lich King's armies. Eventually growing to become the beast Hadronox, it was instilled with a desire to avenge the fallen of the kingdom and reclaim its home from any who would threaten it.[4]

During this dire battle in the nerubian capital, a new threat emerged from Azjol-Nerub's deepest reaches. In an effort to replace ground lost to the undead, the nerubians dug progressively deeper into the earth. In doing so, the inadvertently uncovered the faceless ones, minions of the ancient old gods. These monsters, in the service of their master Yogg-Saron, attacked the nerubians with immense ferocity. Now fighting a desperate war on two fronts, what was left of the Nerubian Empire collapsed and was overwhelmed by its enemies.[5]

The fall of the spider kingdom marked the conclusion of the War of the Spider, as the Lich King, now fully unopposed to rule the entire continent, began making preparations for his assault on Azeroth's other inhabitants.

The War of the Spider marked the conclusion of resistance to the Lich King on the continent of Northrend. In the period following the conflict, the Scourge made an effort to raise from the dead the many nerubians who had fallen in battle. Such was the size of their numbers that they significantly bolstered the undead ranks in the form of crypt fiends and crypt lords and played a major role in the Lich King's armies in the wars to come.

Although the majority of nerubians had fallen in defense of their kingdom during the war, a small group managed to survive the slaughter. Calling themselves the Azjol-anak, they promptly went into hiding but eventually reemerged with the commencement of the War against the Lich King years later. Their primary goal became the reclamation of their once-mighty kingdom and the ultimate rebirth of their race.[6]

Tichondrius, as lord of the dreadlords at the time, is likely to have led them—and possibly the Scourge—in battle during the war.