Warbrave Oro is a Highmountain tauren warbrave who first appears at Krasus' Landing in Dalaran to request aid for the Highmountain Tribe. He later journeys to Riverbend in order to help defend it from the drogbar attack, but when Dargrul uses the

[Hammer of Khaz'goroth] to destroy most of the village, Oro is caught in a stone fist and has to be rescued by the player.

Shortly afterwards, he leads a group of warbraves in an attempt to kill Dargrul while he is in Bitestone Enclave, but the entire group — with the exception of the player — are killed when Dargrul uses the hammer to impale them on earthen spikes.

Oro's family live at Oro's Overlook south of the Sylvan Falls in southwestern Highmountain. After his death, his wife Kura says that she knows Oro would not want her to lose herself in grief, though Oro Junior, the younger of their two sons, appears to not yet be aware of his father's death.

After his death, a memorial note for Oro can be found at a shrine in Snowblind Mesa. 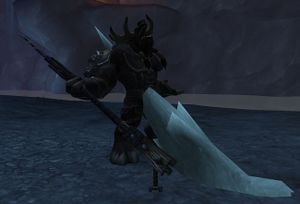 Oro after being killed by Dargrul.

Riverbend
I heard what you did for the Rivermane tribe.

When we first met in Dalaran I did not expect that you would be as helpful to us as you have been.

It is much appreciated.

[100 - 110] Dargrul and the Hammer
Well timed, champion. We have cleared a path to Dargrul. This way...
Dargrul the Underking! Come down here and face justice for those you have betrayed.
Aaaah! (Last words)