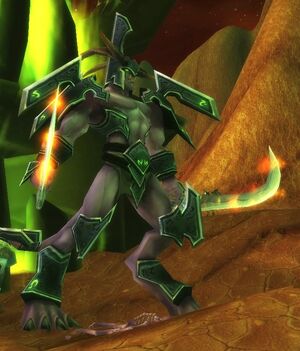 Warbringer Arix'Amal standing in front of the Legion's portal.

Warbringer Arix'Amal is the overlord of Invasion Point: Annihilator and under the command of the Legionlord Arazzius the Cruel.

Known to be a very glitchey mob to fight, if you pull him away from his spawn he may run back at half health and regen. The best way to kill him is to keep him from moving from his spawn, either melee or point blank shooting.

[62G] Mission: Kill the Messenger mention "Arix'malidash" which may have been his original intended name.