Warchief Kargath Bladefist is the final boss of the Shattered Halls, the third wing of Hellfire Citadel in Outland's Hellfire Peninsula.

Chieftain of the Shattered Hand clan and warchief of the Fel Horde, Kargath is one of the greatest orcish heroes in recent memory. Over the years, he has severed both of his hands and replaced them with weapons of war, a bloody ritual unique to his clan. The joy he derives from inflicting pain on both others and himself is legendary among the orcs. As the Fel Horde's tyrannical ruler, he has channeled his ruthlessness and ferocity into forging an unstoppable army within the iron walls of Hellfire Citadel.

Note: At the start of the fight, pairs of stealthed elite assassins (identical to the ones that attack you in the last hallway) spawn near the bottom of the stairs on both sides of his cage. These assassins will not aggro unless a player gets too close to the bottom of the stairs. Thus, it is very important for all members of the party to stay no more than two steps from the cage.

It is important for all players in the cage to spread out as much as possible to avoid multiple hits from Blade Dance. Since this happens on a regular timer, it is not difficult for melee DPS to know when the next one is coming and disengage and move away before it begins.

Here is the positioning that we tend to use, which works very well and results in few injuries. The position of the tank also lets him grab initial aggro on adds as they run in the room to give DPS more room for burning them down. 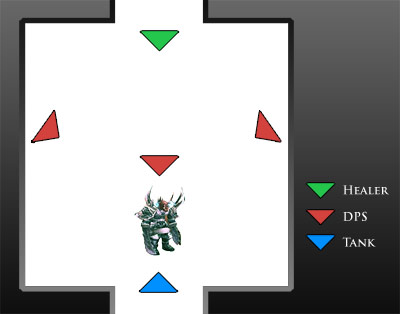 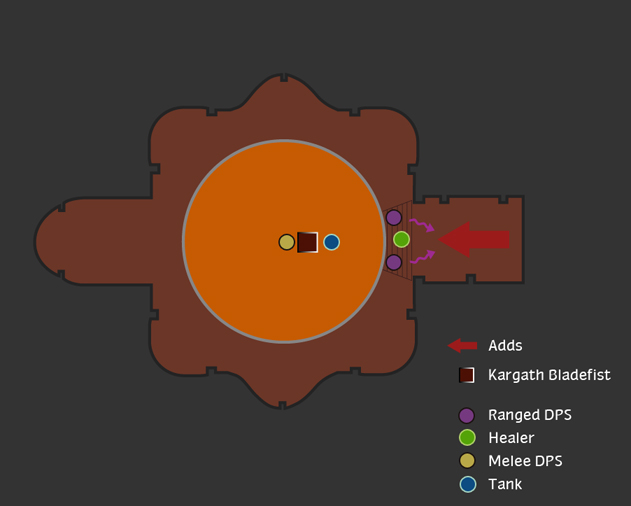 Execution Order (Alliance)
The Alliance dares to intrude this far into my fortress? Bring out the Honor Hold prisoners and call for the executioner! They'll pay with their lives for this trespass!

Execution Order (Horde)
Thrall's false Horde dares to intrude this far into my fortress? Bring out the Thrallmar prisoners and call for the executioner! They'll pay with their lives for this trespass!

If pulled too far
Cowards! You'll never pull me into the shadows!

Death
The true Horde... will prevail.