From Wowpedia
(Redirected from Warchief of the Horde)
Jump to: navigation, search

"Warchief of the Horde" redirects here. For the BfA quest, see 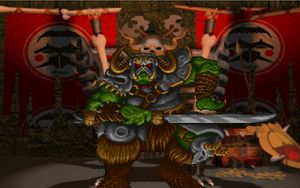 — Excerpt from the Blood Oath of the Horde

During the war with the draenei before the opening of the Dark Portal, Gul'dan envisioned two groups of leaders for the orcs when he united them into the Horde: the Shadow Council who shared his vision, and the publicly elected Warchief to be its puppet.[1] On Draenor, Ner'zhul took the title in the event Gul'dan should ever return. The Warchief became the title of the Horde's supreme leader, though their duties no longer included simply war.

The position was ultimately retired following the Fourth War, after the tenure of Sylvanas Windrunner was riddled with controversy in the wake of warchiefs such as Garrosh Hellscream. Instead, the Horde is now led by the Horde Council; though it is unknown if the position will be restored should the Horde go to war again.

Other organizations, primarily orcish clans or offshoots of the Horde, have warchiefs as well.

Roles of the Warchief in the Horde

All members of the Horde have to swear a blood oath to join the Horde and are thus obligated to follow the warchief's commands and support the warchief in times of war if the warchief calls upon them for aid.

The position of warchief can be attained by having the previous warchief chose a successor or challenging the current warchief to a Mak'gora: a prearranged duel with deadly weapons between two people following a formal procedure in the presence of witnesses and traditionally fought until one party yields or is killed, usually to settle a quarrel involving a point of honor. Above all else, the title warchief is granted to those who display strength and decisive action. Warchiefs must be able to gain respect via combat effectiveness and martial conquests but also have enough tact to keep the Horde united and stable.

The warchief may accept ambassadors and advisors from all the different tribes and members of the Horde to makes sure their voices are heard in the running of the fledgling hegemony but ultimately, only the warchief has the final say in matters concerning the entire Horde.

The Warchief of the Horde has several personal staff: 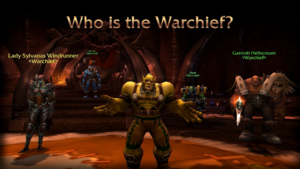 Lore For Noobs: Warchiefs of the Horde