From Wowpedia
(Redirected from Warcraft: Orcs and Humans)
Jump to: navigation, search

Warcraft: Orcs & Humans (also known as Warcraft I; sometimes abbreviated as O&H) is a real-time strategy game (RTS) and the first video game in the Warcraft series developed by Blizzard Entertainment. The MS-DOS version was released on November 23, 1994 and quickly became a best seller.[2] The game features two races, the humans of the Kingdom of Azeroth and the invading orcs of the Orcish Horde. The game sold 100,000 copies in its first year, making it Blizzard's best selling title at its time of release.[3] The game is currently out of print and the demo that was once available on Blizzard's website is no more; although the demo can still be downloaded from available third parties such as the Internet Archive.[4]

Although Warcraft: Orcs & Humans wasn't the first RTS title to offer multiplayer games, Blizzard's game persuaded a wider audience that multiplayer facilities were essential for future RTS titles. The game introduced innovations in mission design and gameplay elements, which were later adopted by other RTS developers.

Blizzard's main emphases in these RTS games were on skillful management of relatively small forces and development of characterization and storyline within and between games played in the same universe. Sales were fairly high, reviewers were mostly impressed, and the game won three awards and was a finalist for three others. The sequel, Warcraft II: Tides of Darkness, became the main rival to Westwood Studios' Command & Conquer series, and this competition fostered an RTS boom in the mid to late 1990s. Following the direct sequel, a whole universe of games, novels, and comic books followed for the Warcraft universe.

On March 28, 2019, Blizzard partnered with GOG.com and released it digitally for the first time.[5] The game is powered by DOSBox.[6] 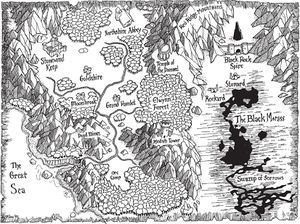 Warcraft: Orcs & Humans has not only became a classic, winning many awards but has also set new standards for multiplayer games. Set in the mythic Kingdom of Azeroth, players are given the task of maintaining a thriving economy while building a war machine with which to destroy the enemy.

By playing either as a Human or as an Orc in this saga, two separate story lines evolve with 12 missions per side, each telling a different tale in the battle for Azeroth. From swords to sorcery, all the elements of classic fantasy are here to explore; rich forests, dark dungeons, and bubbling swamps await the stalwart troops amassed to fight for dominance.

The multiplayer aspects of the game bring Warcraft to a new level of excitement. A player can challenge another one on over 20 custom maps and determine who is the supreme warlord. Head to head play is supported over a modem, serial link, and IPX networks, and works cross-platform with both the IBM-PC and Macintosh versions.[2]

Warcraft: Orcs & Humans laid out the foundations for many of the tropes that would later become recurrent in the series: emphases on skillful management of relatively small forces, a living universe that is detailed both through in-game cutscenes and a rich user manual, dungeon maps, civil war maps, the presence of creeps creatures, units responding humorously when clicking on them repeatedly. Unlike in Warcraft III: Reign of Chaos, units and buildings in both of the armies have mostly the same functions and stats but with different sprites.

Multiplayer and AI skirmishes that are not part of campaigns were supported by a random map generator.[7]

Before the start of the First War, the orcs, originating from the world of Draenor, were corrupted by the Burning Legion to form the mighty Horde. They slaughtered the other races of their planet, but their desire for bloodlust remained insatiable. Their leader Gul'dan joined forces with the Last Guardian Medivh, who was corrupted by the demon lord Sargeras, to open a portal to another world called Azeroth.

From that point on, the orc campaign involves the orcish Horde's attacks on the humans and other forces of this world. After many battles and through a war of attrition, the Horde eventually overwhelms the human kingdom of Azeroth, and later chooses to pursue the survivors across the seas to the north. The city of Stormwind is destroyed in the final battle of the campaign.

The human campaign is an alternate history in which the humans successfully defend their kingdom against the Horde and pushes the orcs back to their main fortress at Blackrock Spire. Its destruction signals the end of the human campaign.

Later games consider that the result of the First War was an orcish victory (the orc campaign end), but with several plot points taken from the human campaign. As a result, a great part of the history was retconned with later games; for a full list of changes, see here.

No one knew where these creatures came from...

Inspired by Dune II,[8][9][10] work on the game began in 1993. Aiming to create "the high fantasy version of [Dune II]" with "battle axes and orcs",[9] influence was taken from Lord of the Rings, Conan, Dungeons & Dragons, and other classical fantasy tropes. This was mixed with "a 90s comic sensibility" with hyper-proportional, colorful characters.[11] Warcraft marked the beginning of the "Blizzard (art) Style," to go against photorealism in games.[12] The name "Warcraft" was created by Samwise Didier when he shouted it out during a lunchtime brainstorming session.[9] It was previously the name of his Dungeons & Dragons character and was intended to be the opposite of the word "witchcraft",[13][14] and he mentioned that he had always wanted to use the name to make a game. The other developers all liked the name and decided to use it because of its coolness, rather than it being based on any game design elements.[10]

According to Bob Fitch, the theme for Warcraft had been inspired by taking the vikings from The Lost Vikings and combining with masses of creatures under their automated control similar to Lemmings, with the multiplayer element of having these opposing masses of vikings meet up and fight each other.[15]

Blizzard co-founder Allen Adham originally hoped to obtain a license to the Warhammer universe to try to increase sales by brand recognition. Warhammer was a huge inspiration for the art-style of Warcraft, but a combination of factors, including a lack of traction on business terms and a desire on the part of the rest of the development team to control their own universe nixed any potential for a deal.[16] At one point, Adham wanted to use Warcraft as the name of a whole series of games about different eras of warfare across many different genres—including fantasy, science fiction, modern military, and historic military—all with the title Warcraft and a subheading (e.g. "Warcraft: Vietnam"), with Warcraft: Orcs & Humans being the first. Adham intended this as a strategy to optimize for retail stores: having many related titles next to each other on store shelves would create cross-selling opportunities and show that the brand was well-supported. However, the only two games from this original plan that ended up actually getting made were Warcraft and StarCraft.[10]

The game's cinematics were worked on by two people and were completed over an 8 to 12 week period.[17]

At BlizzCon 2013, J. Allen Brack announced that several people were working on a side project to update the old Warcraft games for modern computers.[18][19] In 2016 or prior, Warcraft I and II were considered for the remaster treatment, but Warcraft III was chosen instead due to higher levels of fan demand.[20]

At BlizzCon 2016 Frank Pearce stated that while the game was now playable on modern systems, there were no plans to remaster it.[21] At BlizzCon 2017, Brian Sousa stated that Classic Games had discussed remastering/re-releasing the game.[22]