From Wowpedia
(Redirected from Warcraft II)
Jump to: navigation, search

Warcraft II: Tides of Darkness (usually simply called Warcraft II; sometimes abbreviated to WCII, WC2, or War2) is the second, highly popular real time strategy game from Blizzard Entertainment set in the Warcraft universe. The novel Tides of Darkness, by Aaron Rosenberg, focuses on the events in this game.

Warcraft II: Tides of Darkness is a sequel to the real-time strategy game Warcraft: Orcs & Humans and published by Blizzard on December 09, 1995.[1] Users play either orcs or humans in a fantasy medieval world full of magic and swords. It was originally written for the DOS operating system, though it had an MS-DOS Windows launch screen and played well under Windows 95. In addition, there was a Macintosh version of the game. Blizzard also released an expansion pack known as Warcraft II: Beyond the Dark Portal and later a sequel to this game, Warcraft III: Reign of Chaos. The game has a linear single-player campaign for each side, and a multiplayer option via a LAN or the Internet, using existing or user-created maps. According to the README.TXT file included alongside the Warcraft II demo version, the graphics are pre-rendered 3D models.

Blizzard sold exclusive worldwide rights to develop, publish, and distribute console variants of the game to Electronic Arts.[2] In 1997, Electronic Arts released Warcraft II: The Dark Saga for the PlayStation and Sega Saturn, which combined the campaigns of Tides of Darkness and Beyond the Dark Portal. The Battle.net Edition eventually released in 1999, providing Blizzard's online gaming service, Battle.net, and replacing the MS-DOS version with a Windows one.

The game is currently out of print and the demo that was once available on Blizzard's website is no more; although the demo can still be downloaded from available third parties such as the Internet Archive.[3] On March 28, 2019, Blizzard released Warcraft II: Battle.net Edition digitally for the first time on GOG.com, which includes both the original Tides of Darkness and the Beyond the Dark Portal expansion.[4] 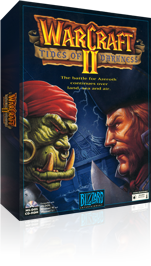 Among the new features brought by the game compared to Orcs & Humans are the capacity for several units to be selected at the same time, naval and aerial combat, oil as a new resource, upgradable buildings and units, new tilesets, and the presence of Fog of War. The Warcraft universe is also greatly extended, with a much wider world, new technological advancements and many new races. Most of the campaign missions follow the pattern "collect resources, build buildings and units, destroy opponents" - however, some have other objectives, such as rescuing troops, forts or escorting important characters through enemy territory. A simple but effective map editor was also delivered with the game.

The game solidified further and expanded upon the tropes that would later become specificities of the series.

With the death of the Orcish Warchief Blackhand, his underling Orgrim Doomhammer was quick to seize control over the most powerful of the Orcish forces on Azeroth. Although each day finds other factions growing stronger within the chaotic Horde, it seems certain that all of the clans will follow Orgrim's plans to hunt down and destroy the renegade Azerothiens wherever they choose to run...

Sir Lothar, in charge of the scattered armies of Azeroth since the death of King Llane, has led his people across the Great Sea to the shores of Lordaeron. By enlisting the armies of Lordaeron, and making new allies in the Elves and Dwarves, a mighty force known as the Alliance has been forged. Now, the last of the once great armies of Azeroth seek retribution for the loss of their homeland.

Like Warcraft: Orcs & Humans, most of the game's units on the two sides are immediate counterparts to each other. The armies are balanced by their similarity; the only real differences can be found in the spells used by some higher-level units. The number of units has been increased, and the units themselves have more elaborate abilities. Naval and aerial combat was first introduced into the Warcraft series, there are transport ships, oil tankers, attacking ships, as well as flying units such as dragons or zeppelins.

As an aesthetic change, both sides are allied with three minor races. Humans allied with high elves, dwarves and gnomes while orcs allied with ogres, forest trolls and goblins. Some campaign missions feature hero units. Hero units have heightened statistics compared to their normal counterparts, cause mission failure when killed, and each has a unique picture and name.

One of the features of Warcraft II is the unit quotes. If a single unit was clicked several times in a row, the unit's voice samples would change. The unit would start getting angry at the player, or start saying silly things in reference to movies, games, or other things. For example, a Footman might say, "Don't you have a kingdom to run?". Footmen and Grunts said different things in the game's demo, from some of those they did in the retail version, most of them exhortations to buy the game later. 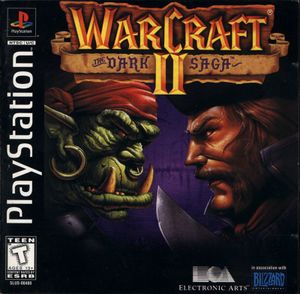 Warcraft II was an unusual game for the time because a large number of third-party utilities were written for it. Among the first things, Daniel Lemberg reverse-engineered the Warcraft II map file (*.pud) format and created the first third-party map editor, War2xEd, which could do numerous things the bundled map editor could not do, such as editing unit attributes. Although Daniel Lemberg did not make the source code for War2xEd public, he did publish the complete Warcraft II map file format, which led to a wealth of new tools. More importantly, Blizzard began to use War2xEd internally, and it influenced them to bundle a feature-rich editor with their immensely popular game StarCraft.

The next important breakthrough came when Alexander Cech and Daniel Lemberg broke the encryption used in the base game data files. Alexander Cech went on to create a program called Wardraft, which allowed users to browse and modify the contents of the game data files, allowing comprehensive modifications. The spawn of extensive alterations became known as "Total Conversions", and a great many projects were in motion for a good long while. Some of the more prominent were DeathCraft: Twilight of Demons by Dirk "The Guardian" Richartz, War of the Ring by Gurthaur, Editor's Total Conversion by Fronzel Neekburn and the whole of the Warclan, and the noteworthy Rituals of Rebirth spearheaded by Kalindor, Kosmous, and Commoner.

There was also a free software game inspired by Warcraft II called Freecraft, which, while allowing users to import actual game data from Warcraft II, also contained their own artwork and scenarios. Although it used no art or code from Warcraft II, the project received a threatening cease-and-desist letter from Blizzard, apparently due to similarity to the Warcraft trademarks. Not willing to fight Blizzard, the maintainers canceled the whole project. The project was later rekindled under name Stratagus.

Many of the utilities and conversions have faded into the depths of obscurity, but the appeal of feature-rich editors and total conversions has lived on. 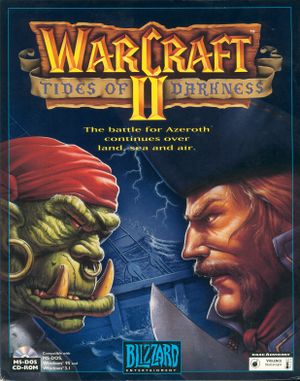 Under the working title Warcraft II: Blood Seas, work began in January 1995, right after the release of its predecessor.[5] There was an initial idea where another portal would open and orcs would invade the modern-day world. A cutscene was conceived where dragons would be fighting F-16s. The idea was abandoned.[6]

The biggest focus on the game was to improve the graphics.[5] Development of the game went for longer than anticipated.[7]

At BlizzCon 2013, J. Allen Brack said they have several people working on a side project to update the old Warcraft games for modern computers.[8][9] In 2016 or prior, Warcraft I and II were considered for the remaster treatment, but Warcraft III was chosen instead due to higher levels of fan demand.[10] At BlizzCon 2017, Brian Sousa stated that Classic Games had discussed remastering/re-releasing the game.[11]