For the original real-time strategy game, see Warcraft II: Tides of Darkness. For the novel covering the same events, see Beyond the Dark Portal.

Both Tides of Darkness and Beyond the Dark Portal were later compiled and ported to the PlayStation and Sega Saturn as Warcraft II: The Dark Saga. The Battle.net Edition eventually released in 1999, providing Blizzard's online gaming service, Battle.net, and replacing the MS-DOS version with a Windows one.

On March 28, 2019, Blizzard released Warcraft II: Battle.net Edition digitally for the first time on GOG.com, including both the original Tides of Darkness and the Beyond the Dark Portal expansion.[1] 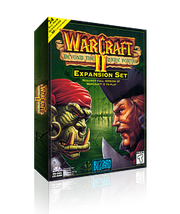 The gameplay was left almost unaffected, with the exception of the introduction of hero units. The hero units were present in the core game, but played a minor role, while in this expansion they played a large role. The heroes have all the upgrades researched and stats superior to the normal troops, as well as their own quotes, but have the disadvantage that if they die, the player loses the mission.[2]

Beside the introduction of the heroes, there were 24 new missions, various new cinematics and nearly 50 multi-player scenarios. The new scenarios are harder than the core game scenarios and even exclude tutorial levels like Tides of Darkness.[2] They are also often more scripted, with more complex AI behaviors, such as some armies being programmed to use "human wave" attack strategies instead of focusing on upgrading their troops, while others are programmed to build their own base instead of starting with a preset one. The player will also often start missions with only a handful of workers and soldiers now.

New game features include multi-player support for as many as 8 players via Battle.net or IPX network and shared vision in multi-player games and a new tileset for Draenor.[3]

Players also visit new areas in Azeroth, such as Nethergarde Keep, the city of New Stormwind, and the island nation of Kul Tiras. 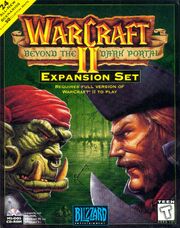 After destroying the mystic gate into Azeroth, the humans discovered that the rift which allowed the orcs passage into their world still existed. Soon the remnants of the Bleeding Hollow clan managed to find a way to use this rift to return to their home, and begin planning a new invasion. On Draenor during this time, Ner'zhul - chieftain of the Shadowmoon clan - has seized control of the Orcish Hordes of Draenor, and began gathering his forces. Driven from his shamanistic ways by the temptation of Kil'jaeden and forsaken by the orcish ancestor spirits, Ner'zhul became jealous, angry, and brooding. When the death knight Teron Gorefiend approached him regarding a plan to open a portal from Draenor to a new world, ripe for conquering, he saw this as an opportunity to finally redeem himself in the eyes of his people.

Ner'zhul commanded Gorefiend to return to Azeroth once more and seek out the Book of Medivh. With this, the former shaman hoped to learn the secret to opening new portals. Gorefiend's army, which included legendary warriors such as Grommash Hellscream, Kargath Bladefist, Dentarg, and even the dragon Deathwing, also recovered several other artifacts during their raids, including the Eye of Dalaran and the Jeweled Scepter of Sargeras, which were to be used to channel the energies needed to open the portal. In addition, Gorefiend retrieved the Skull of Gul'dan, which was being worn by the Bonechewer chieftain, Hurkan Skullsplinter. This turned out to be unnecessary for the portal ritual (despite having a great deal of demonic power trapped within), but was given to Ner'zhul as a gift. The Shadowmoon chieftain took great pleasure in looking upon the last remains of the pupil who had betrayed him.

However, the Alliance quickly recovered from the series of surprise raids in which Gorefiend had accumulated these objects of power. They mounted an expedition led by heroes of various nations, including Alleria Windrunner, Khadgar, Turalyon, Kurdran Wildhammer, and Danath Trollbane, which would follow the orcs through the reopened Dark Portal and stop them from ever returning. There, they found a Horde disorganized and divided, its leader increasingly obsessed with the idea of new portals and new worlds which lay undefended. Some of the clans were even willing to side with the Alliance. While the Expedition worked to defeat scattered but bloodthirsty armies in what is known today as Hellfire Peninsula, Shadowmoon Valley, Terokkar Forest, and the Blade's Edge Mountains, Ner'zhul was launching his plan into action.

No longer satisfied with simply opening a portal to a new world for the death knights to rule, he opened a multitude of rifts to the Twisting Nether. The resulting torrent of fel energy that was released shattered the red world of Draenor, transforming it into Outland. Ner'zhul entered one of these portals along with many of his followers, only to encounter the vengeful Kil'jaeden once again. Meanwhile, the Alliance Expedition forces found themselves trapped on the doomed world of Draenor. Before the explosion, Khadgar and his allies made the decision to destroy the Dark Portal there on Draenor. Khadgar used the Book of Medivh and the Skull of Gul'dan (which they stole and recovered) to destroy the portal. Though this would leave the Alliance Expedition trapped on the alien planet, it was the only way to ensure the safety of the people back on Azeroth.

In Warcraft III: Reign of Chaos it is learned that Ner'zhul was intercepted by agents of the Burning Legion and transformed into the Lich King, it is also known that Illidan Stormrage finds the Skull of Gul'dan in Felwood forest in Kalimdor and obtains his powers to become half demon half night elf. In Warcraft III: The Frozen Throne it is learned that parts of Draenor survived and is now called Outland. Survivors of the Alliance Expedition appear in World of Warcraft: The Burning Crusade.