Warcraft III: Reforged is a remaster of Warcraft III: Reign of Chaos and Warcraft III: The Frozen Throne, first announced at BlizzCon 2018 and slated for release on January 28 and 29, 2020.[1][2] It will support graphics up to 4k and feature a revamped UI.

The game is developed by the same team that did StarCraft: Remastered.[3][4][5] It utilizes an upgraded version of the original game engine, in order to preserve mod functionality from the original game.[5] Its graphics engine however has been completely overhauled.

Reforged is available in two versions: the Standard Edition and the Spoils of War Edition.

Shape the Fate of Warcraft's World
Warcraft® III: Reforged™ is a complete reimagining of a real-time strategy classic. Experience the epic origin stories of Warcraft, now more stunning and evocative than ever before.

A Classic Favorite, Reforged
Warcraft III: Reforged is a stunning reimagining of the revolutionary real-time strategy game that laid the foundation for Azeroth’s most epic stories. It is a remake in the truest sense, featuring a thorough visual overhaul, a suite of contemporary social and matchmaking features, and more. Command the Night Elves, Undead, Orcs, and Humans as alliances shift and armies clash in this timeless real-time strategy game.[7]

With rebuilt versions of all the original games’ art made with cutting-edge animation technology, hours of updated in-game cinematics, plus an overhauled World Editor and full integration into Blizzard Battle.net for a new era of multiplayer gameplay, Reforged is nothing less than the definitive Warcraft III experience. Conquer the battlefield anew as one of four playable races—the mighty Orcs, the noble Humans, the ancient Night Elves, and the insidious Undead Scourge—and experience the legends of Azeroth reborn.[8] 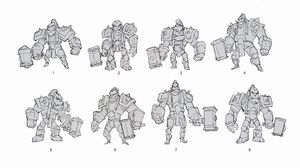 Blizzard's Classic Games team began development on Reforged in 2016.[10] The "core team"—artists, engineers, and the like—that had worked on StarCraft: Remastered were moved over to Warcraft after completing work on StarCraft.[11] Warcraft: Orcs & Humans and Tides of Darkness were considered for the remastered treatment, but Warcraft III was chosen due to the higher level of fan demand.[10]

When doing the art for the game, the initial approach was to make the game's units highly cartoony and stylized. However, it was noticed that the cartoony approach was quite common in other games, so the team took a step back and considered "What really speaks Warcraft to us?". Team members like Brian Sousa and Chris Amaral have cited the character design in the Mists of Pandaria intro cinematic as an inspiration, describing it as a perfect mix of Blizzard stylization and realistic textures,[3][21] in contrast to subsequent World of Warcraft cinematics' shift toward more realism.[18] The orc and human concepts from the Mists cinematic were used as a base, and the team began redoing the Grunt model.[3]

Since a lot of Warcraft III images are so old and small, assets from World of Warcraft were referenced as WoW does a better job of representing the series' modern look. At the same time, months were spent iterating on the orcs—multiple versions with varying proportions were created due to the differences between WoW's third-person perspective and the top-down view of an RTS.[21] Eventually, the team managed to reach a satisfactory point with the Grunt.[3] Pete Stilwell has stated that he considers the Grunt to be the unit that most nailed the aesthetic that the developers are aiming for, and the model was treated as the gold standard for subsequent model updates.[11] Orcs and humans were the first races that were worked on as the team felt that they were the races that most clearly defined Warcraft III's lore. This was followed by the undead so that they could be included in The Culling demo mission at BlizzCon 2018.[17]

When creating the Reforged unit models, the developers started with concept art before moving to block-outs (simple shapes), after which sculpting artists went through and created elaborate, high poly models (referred to as the "high poly stage" of the process). The amount of polygons was then reduced to a more manageable number while still retaining the model's details and baking it into a simpler geometry.[11]

At one point during development, the team members all sat in a room and brainstormed ideas like new neutral buildings, new items, a new tile set, and a new neutral hero from the Tavern.[21]

The developers talked to the Warcraft III communities in China and Europe to get feedback, such as which heroes were chosen in multiplayer and why, how they felt about certain units, and which maps they liked.[3] In contrast to when the team was designing StarCraft: Remastered and was asked by Korean fans to change the game as little as possible, the Chinese Warcraft III community encouraged them to make changes and additions to the game.[18][16] Modders were hired to work on the map editor prior to the game's announcement, but Blizzard couldn't reveal what they'd be working on until after they'd joined the team.[5] The original source code and assets from Warcraft III were used in the game's development.[22] The process of getting the original Warcraft III engine up and running again took roughly six months longer than the team had expected.[18]

Patch 1.28 for Warcraft III and the various balance changes were precursors to Reforged, though at the time it was not confirmed.[3]

The game was officially announced at BlizzCon 2018, where a demo of the The Culling was present. Pre-purchases were immediately available. On the question of an alpha or beta, Robert Bridenbecker stated "I'm looking forward to next year".[5] The beta was originally said to likely focus on zones that have changed between Warcraft III and World of Warcraft, such as Stratholme.[10] By the time of BlizzCon, the human and orc factions were the furthest along in development whereas undead and night elf units were undergoing the high poly stage.[11] 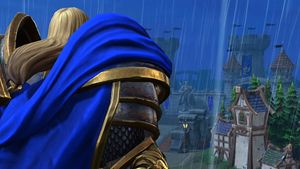 Example of an overhauled cutscene from the BlizzCon 2018 demo.

As showcased in The Culling demo, the developers originally planned to significantly overhaul (or "recut") the game's single-player campaigns and retcon parts of the story to align it more with World of Warcraft. The intent was to add more connective tissue between the various games and novels of the franchise to make it feel like a cohesive whole as well as ensure that players who had started out with World of Warcraft would be "invited" to see the origin stories of characters that ended up in the MMO.[9][10][23] Christie Golden was brought on to help bring parity to the stories of Warcraft III and World of Warcraft as well as further develop characters like Jaina Proudmoore and Sylvanas Windrunner, who only played supporting roles in Warcraft III but have since become far more prominent characters in the setting.[10][16][22][17] In addition, Golden would also help rewrite some of the existing dialogue and unit quotes. Examples included parts of the original script that were intended to be placeholder text but inadvertently ended up in the final game,[10][11][24] lines of dialogue that feel clunky and overly modern,[23] and unit gag quotes that contain outdated pop culture references that don't make much sense to modern audiences anymore.[18][23] All voice acting in the game was planned to be redone,[9][10] including both old and new voice actors and with an option to toggle between old and new voices.[11] In addition, all in-game cutscenes were planned to be completely redone with a new camera system and camera angles to showcase the higher-definition models and zoom in on characters as they talk, rather than having pop-up dialogue windows.[4][10] The developers possibly even planned on adding entirely new missions to the campaigns, such as adding back the original final night elf mission that was cut from Reign of Chaos,[18] and it was mentioned that Reforged was an opportunity for the team to develop various story ideas that ended up not making it into the original game.[10] However, it was mentioned that the Exodus of the Horde and Founding of Durotar campaigns would not be getting recut.[9]

The announcements of these story changes were met with divisive feedback from players. While some fans welcomed the changes, others were vocal about wanting the game's story to remain untouched. As the developers went back to work after BlizzCon, they realized they weren't happy with the direction they were taking with The Culling demo and decided to heavily dial back the changes they were planning.[12] According to Robert Bridenbecker, the decision to walk back the "retconning plans" was a natural part of the development process, since simply updating the original game's tens of thousands of art assets and supporting custom maps and mods was a monumental challenge in and of itself.[14] In short, the story of Reforged is the same as that of Classic but with new visuals and technology.[13]

The beta was originally planned to become available in the spring of 2019.[10] The multiplayer beta officially began the week of October 29, 2019 with limited access to the orc and human races in 1v1 and 2v2 matchmaking, with undead and night elf races and additional game modes becoming available in subsequent weeks. The beta announcement was accompanied by the full reveal of the remaining unannounced rewards from the Spoils of War Edition.[25]

Reforged was originally expected to release by the end of 2019. However, on December 17, 2019, the game's official release date was announced as January 28 and 29, 2020,[1][2] with the developers stating that they felt they needed some extra development time to apply finishing touches to the game.[2]

Sometime before the game's release, Blizzard intends to release their art tools along with guides on how to use them for custom map creators.[3][10]

After the game launches, a dedicated Warcraft III team will remain to support the game and make balance changes, similar to the StarCraft: Remastered team.[11][13][24] If the game is received well and there is a community demand for it, the team has ideas for additional post-launch and post-post-launch content that they'd like to add.[11][21] In November 2019, Production Director Kaeo Milker stated that this would not necessarily be in the form of new campaigns, but rather new art assets to support the custom map making community.[13]