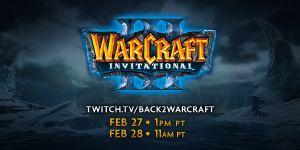 Warcraft III Invitational is a special tournament event that was announced on February 21, 2018 to celebrate the release of a new major patch for the RTS game, Warcraft III. It includes a slew of special events, including Free-for All, 4v4's, and other friendly competitions.[1]

The first event took place on February 27 and February 28, hosted by Neo and Remo of Back2Warcraft.[1]