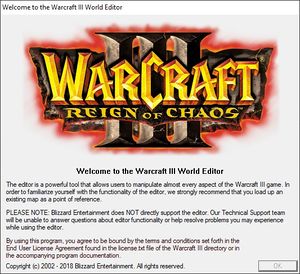 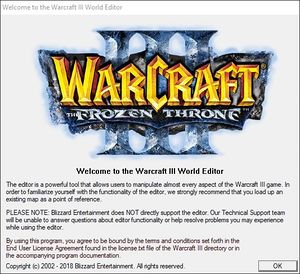 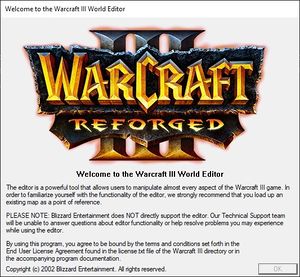 The Warcraft III World Editor is a powerful tool that allows manipulating almost every aspect of the game. It can be used to edit existing maps or to create custom maps and campaigns.

The World Editor has built up a huge community of map making enthusiasts who share their work online with others through various sites dedicated to map-making and modding in Warcraft III. Various parts of these modding sites include models, campaigns, skins, spells and, of course, maps. Notable sites include The Hive Workshop.

The Terrain Editor is the editor of the map, in this option the user can modify the terrain and can place the units, doodads, cameras, regions, and move or modify them.

This is the most advanced and powerful portion of the World Editor. The Trigger Editor allows you to take complete control of every aspect of the game. It is a simplified programming language designed to be accessible to novices, but powerful enough to satiate the desires of more advanced users.

The Sound Editor allows you to import and export sound (.wav) files and music (.mp3) files and then play these sounds through triggers in the Trigger Editor.

The Object Editor let the user modify all the statistics, art and names of all the units. Also allows creating own custom units.

The Campaign Editor, as the name says, allows the users to create his/her own campaign.

The Artificial Intelligence Editor allows the user to make the computer players do what he/she wishes, to activate the AI a trigger must be made.

The Object Manager manages and cross-references all doodads, units, items, regions, and triggers currently in the user's map.

The Import Manager let the user import many kinds of files to the map. For images, the format .tga must be used, for sounds and music the formats .wav and .mp3 must be used, can also import fan-made models and skins.