This evolution guide serves as an archive of anecdotes, trivia, and other interesting facts about the several game design shifts that Warcraft III: Reign of Chaos had during its development stage.

Warcraft III was a huge step up for Blizzard Entertainment: it was their first 3D game, the first time they were developing a game concurrently alongside other medias like novels and TTRPG's, their previous Warcraft game had just been canceled, and they had very huge ambitions about shaking up the world of strategy games. Blizzard's experiments with Warcraft III even led to the beginning of the work on World of Warcraft.

Warcraft III was the first time that Blizzard made an effort to preserve a game's assets and source code while developing it.[1] Its development team consisted of less than thirty people. Traditional development roles weren't assigned, as various staff members worked on various tasks.[2]

Originally, Warcraft III started out as a game called Heroes of Warcraft. It was a squad-based tactical combat game, thus departing from the type of traditional RTS games that Blizzard had already released earlier for both the Warcraft and StarCraft universes. Eventually, the game morphed into a more traditional RTS, but retained the element of heroes, after a change of team leads halfway through development.[4] The developers who left had the concept of a client-server, online and very instanced game, with an over-the-shoulder camera and full 3D. When Mike Morhaime pulled the trigger on that concept and wanted the game to come back to its RTS roots, those developers moved away to create the Guild Wars franchise instead.[3]

The game originally started as a "Role-Playing Strategy" experience: a strategy game set heavily within a role-playing environment. It had smaller, potent parties of heroes and troops in a dynamic world of living towns, wandering monsters, characters and quests, with players simultaneously having to devise strategies to defeat their enemies.[5][6] It had six planned races and a slated release date of "late 2000".[3]

In this original design, there was no Fog of War but you couldn't freely move the camera, it could only jump between your heroes. Rob Pardo had described it as similar to the Sacrifice game, except with multiple heroes. Military units were supposed to be much more micromanaged: you were supposed to use your troll headhunters' tracking ability to find enemies, then root them with your raiders' nets, then use the tauren to initiate combat with a bullrush that stunned, and then finally send your orc grunts with their berserker ability that did high DPS. Each unit had a special ability and the number of units you could control varied depending on the "Leadership" stat of your hero,[7] for example if your hero had a Leadership of 8 you could control 8 units. As such, units were referred to as your hero's party.[8]

The game originally utilized a realistic art style, which made everything in the game much smaller. The results were received negatively among the development team, so the colors were made simpler, the shading was decreased, flat colors were added, and characters were scaled up and made bigger and bulkier. This made the units easier to read from the top-down camera, and also made everything feel bigger and more heroic.[9] According to art director Samwise Didier, "We didn't want to be Lord of the Rings or standard D&D fantasy. We wanted our characters to be the superhero versions of fantasy characters, rock stars with battle axes, with each one of our heroes and units looking like they could take on a whole army by themselves."[3]

The game was not designed with e-sports in mind.[10]

There was much discussion as to whether the game needed navies, oil, and water combat; whether the game would build on Warcraft II in regards to the naval aspect.[2] The team eventually chose not to include naval units in Reign of Chaos because they couldn't come up with a way to make them feel as unique or interesting as the rest of the game, and they didn't want to include ships just for the sake of including ships.[11] Naval units were later implemented with the release of The Frozen Throne expansion.

The team decided to go all-in on the hero concept, with the concept of a mini-RPG merging with a traditional economy-driven RTS. Unlike StarCraft and the previous Warcraft games, Warcraft III was designed to be "stack centric" around hero play. In this sense, the gameplay would reward smaller, more intimate groups of units and their interactions, with less focus on base and mass unit management. The game's upkeep system is reflective of this, where players suffer from resource penalties if their army reaches a certain size. There was much debate about the upkeep system, and Chris Sigaty noted that "the community never really loved it." Sigaty defended the upkeep system, however, stating that "it felt like it was a really good dilemma to put you in as a player."[2]

Weather effects were supposed to happen and have an impact on battles.[12] It's unclear where the idea for the game's day/night cycle originated. According to designer Matthew Morris, there was another RTS game with a day/night cycle which members of the design group would play, but it was mostly a narrative device championed by the art team. Creating a significant visual difference between day and night while also ensuring that the playfield remained visible and readable proved challenging and took some iteration, with the artists eventually settling on a bluish light to represent nighttime. The designers didn't initially have a clear idea of how they wanted to utilize day/night differences in gameplay terms. They experimented with pushing a unit's sight range to cover almost the entire map during the day, but this led playtesters to only attack at night. Late in development, as the team was implementing the final race—the night elves—their "design groove" had gotten so strong that they were able to experiment with more unconventional ideas, which is the reason why night elf units are the only ones who benefit from day/night.[3]

However, during the development, many of the "Role-Playing Strategy" ideas were scrapped and the game became simply a normal Real-Time Strategy game with some RPG elements. Since World of Warcraft began its life as a fork of the Warcraft III engine, the development of the MMORPG presumably began when the developers at Blizzard realized they couldn't keep all of their original RPG features in the game.[citation needed]

There were anywhere between 6 to 13 playable factions planned for Warcraft III—different Blizzard employees have given different figures when asked.[2][15] These factions include:

Heroes were also called "legends" during development.[12] There were originally five planned heroes per faction. The Undead and Night Elves were introduced after an initial cut to four heroes instead, and the game was finally released with three heroes per faction. Some factions also had a flying hero unit planned, but Blizzard removed them all because of imbalance issues. 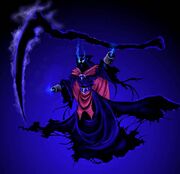 Originally, each basic unit was planned to have something special they could do along with accompanying graphical effects,[12] but in the final game there are some units (such as the Knight) who don't have any abilities aside from passive upgrades from buildings. 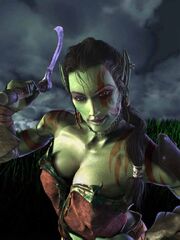 From early on in development, the designers wanted to do something different with how they told stories in a strategy game. In Blizzard's previous titles, the story was almost entirely delivered through cinematics and briefings in between missions, but the inclusion of heroes in Warcraft III allowed them to incorporate dialogue, story moments, and RPG-style quests into the missions themselves. Chris Metzen worked hand-in-hand with the developers to create a campaign story over a period of roughly nine months, during which the design group locked themselves in a room outlining the story beats for each mission and how the story would interact with the map layouts and game mechanics. Every time they hit a creative wall, they forced themselves not to leave the room until it was resolved.[3] Some of the dialogue in the game was originally meant to act as a placeholder, but ended up being voice acted regardless.[39]

Many years after the Dark Portal that bound the Orcish homeland of Draenor and the Human world of Azeroth was destroyed, a young Orc named Thrall was captured and raised as a slave by humans who followed the ways of treachery rather than those of honor.

Using the skills driven into him by his captors with his own natural strength and courage, Thrall escaped his wicked masters and, once free, set out to find his stolen heritage. Finding his kind forced to live passively in controlled settlements, the young warrior sought out the few, scattered Orc clans that managed to evade the wrath of the Alliance. From their camps in the harsh wilderness, Thrall swore to lead his brothers back to the status their heritage demanded. Under Thrall's leadership as the new Warchief of the Horde, the Orcs rediscover their abandoned Shamanistic culture and use this newfound power to revolt against their cruel wardens.

As civil strife rages through the nations of the Alliance, the lands of Azeroth undergo strange changes, and the threat of a new, unseen foe draws near. Finally, in an unholy firestorm from the heavens, the Burning Legion arrives. Cursed to roam the greater realms forever to consume the primal energies of magic to survive, the Legion has ravished world after world in its mad lust for arcane power. Cunning, sinister and seemingly unstoppable, these dark slayers come to not only drain this domain of its magic but to eradicate all life within it, as well.

Now, in the face of an even greater invasion, the reunited Horde and the armies of Azeroth have shifted their focus from conquest, betrayal, defense or honor to that of basic survival...[40]

Not much is known about how the original storyline of Warcraft III differed from the one we know:

Many of the units and buildings that were cut during Warcraft III's alpha and beta stages were reintroduced in one way or another in the single-player campaigns of the game. Some others were only reintroduced in the expansion pack, The Frozen Throne.

Some units changed during the beta:

Several units were also cut during the transition to the expansion pack to be replaced with similar but slightly different units:

Finally, some things were also renamed: All Chaos orcs were renamed to Fel orcs, Owlbears became Wildkin and Malfurion lost his "Furion" nickname.